Memorial Day weekend has come and gone, and according to Captain Matt Walz of the Missouri Highway Patrol, boaters at Lake of the Ozarks managed to stay reasonably safe, despite a few notable incidents. As of Monday, there were six recreational boating accidents reported, four of which resulted in non-life threatening injuries. "For the number of boats on the water, I would say it was a very safe weekend," Captain Walz told Lake News Online.

Memorial Day Accidents at Lake of the Ozarks

On Saturday afternoon, an inner tube accident left a Lee's Summit girl seriously injured. The tube became airborne as a result of a large boat wake, and the rider, Jessica Dennis, was airlifted to Kansas City Children's Hospital.

Then, on Sunday, a jet ski exploded at the 66 mile marker in Camden County, which caused burn injuries to three boaters. The accident happened as Sarah Ferry and Blake Samskey of Olathe were attempting to restart their Sea-Doo after refueling, reports KCTV5. According to Ferry's father, the fuel attendant accidentally spilled fuel into the jet ski's hull after mistaking the oil tank for the gas tank. When the pair was unable to start the Sea-Doo, Ronald Dodson of Lee's Summit offered to assist them. After Dodson checked the spark plugs, Ferry tried the ignition, which triggered the explosion.

Ferry's burns were minor, while Samskey sustained burns from shoulder elbow. Dodson's injuries were the most serious: he was airlifted to Columbia with second-degree burns from the waist up, but he has since been released from the hospital's burn unit. 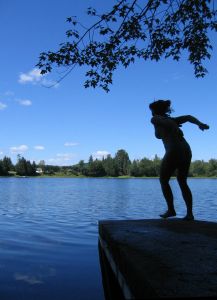 Also on Sunday, three swimmers survived electrocution in the water near Gravois. The Gravois Fire Protection District said that the swift, smart responses by those who witnessed the incident likely made the difference between life and death. When responders arrived, witnesses had disconnected the electricity, pulled the three women from the water, and administered CPR to one of them. All three were taken by ambulance.

According to Lake News Online, the dock was reported to be built before new inspection regulations took effect. "It is critical that dock owners take the responsibility to have a qualified electrician perform work on docks and to see that all available electrical safety devices are installed and operational on their docks along with all work being performed to the established standard," the Gravois FPD said in a news release.

Throughout the state, the Missouri Highway Patrol investigated 14 boating accidents that caused six injuries over Memorial Day weekend 2012, according to a recent news release. In addition, 24 boaters were arrested for boating while intoxicated.