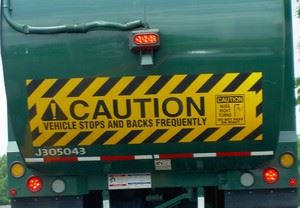 On Tuesday morning, a sanitation worker was killed in the Northland when a trash truck accidentally ran over him, according to Kansas City police. The truck accident happened around the intersection of 107th Street and North Flora Avenue at around 10:55 a.m.

Police say that 18 year-old Brandon Ford was part of a three person crew working from the trash truck, which is owned by Jim's Disposal Service. The crew was running their usual weekly route, and the group had been working together for about a year. Ford was reportedly riding on the back of the truck with a co-worker when he slipped and fell onto the pavement, just as the driver began to back up.

"He was at the extreme rear on the driver's side, but the foot holes go around back so he was toward the rear not within her view," Sergeant Bill Mahoney of the Kansas City Police Department told KCTV5. "This just looks like an unfortunate accident."

The worker riding on the back of the truck with Ford jumped down and yelled to alert the driver, who immediately stopped the truck, but Ford was already pinned under the wheel. Though neighbors who witnessed the incident ran to help, and emergency medical teams responded quickly, Ford was pronounced dead at the scene. He would've turned 19 today.

Sergeant Mahoney says that there is presently no evidence to suggest that the trash truck's driver was negligent in any way, and no charges are expected to be filed against her. However, police will conduct a thorough investigation of the accident.

Ford's brother is also an employee at Jim's Disposal, according to FOX 4 in Kansas City. Chuck Byrd, owner of the company, released the following statement after the accident: "Chuck Byrd and the Jim's Disposal family would like to express our deepest sympathy to the Ford family. This morning's events are an unthinkable tragedy. Our prayers and support are with the Ford family as they grieve the loss of this outstanding young man."

Because sanitation trucks tend to stop and go frequently as they pick up trash, these vehicles can be especially hazardous, particularly for workers who regularly ride on the back. Because of the trucks' size, side mirrors only offer drivers a restricted rear view. In fact, this accident is the second fatal incident this year involving a trash truck accidentally backing over a sanitation worker in the Kansas City area, reports KCTV5.

In February, a driver for Deffenbaugh Industries died in Shawnee, Kansas after being run over by his truck. In that instance, 61 year-old Gary Anderson was working alone when he exited the truck and walked behind it, where he was run over. Police believe he was preparing to back up the vehicle to pick up trash, but it is not known why Anderson left the truck in the first place.

The personal injury lawyers at Aaron Sachs & Associates, P.C. represent accident victims in Kansas City and the surrounding areas, including Independence, Lee's Summit, Liberty, Blue Springs, Raytown and Greenwood. To contact our office, call us toll-free at 1-888-777-AUTO, or visit our website.
Attorney meetings by appointment only
Categories