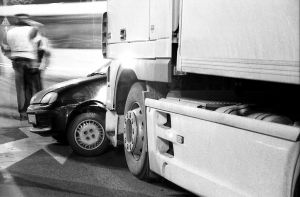 As Missouri truck accident attorneys, we write frequently on this blog about the devastating aftermath of big-rig accidents. Collisions involving commercial trucks are often deadly: because of their massive size and weight, they're capable of inflicting serious damage on passenger vehicles and their occupants.

This week, we were horrified to read about a trucking accident so terrible that it's receiving worldwide attention. It happened south of Sydney, Australia on the Hume Highway: a commercial truck crossed the median to the wrong side of the highway and literally ran over the top of a Ford sedan. Responders had to use a crane to lift the cab of the truck off the completely flattened car.

The three occupants of the sedan were killed. Law enforcement officials were forced to call Disaster Victim Identification (DVI) experts to assist forensic officers: the car was so destroyed that it was initially impossible to determine the age or gender of any of the occupants.

Witnesses and nearby motorists were aghast. "It's the most horrific thing I've ever seen," one passerby said immediately following the collision. "Stay away from the area, especially if you have children in the car. They don't need to see that."

The occupants of the sedan have since been identified as Donald and Patricia Logan, both age 81, and their son, Calvyn Logan, age 59, who was driving the car. The family was returning home after traveling to visit the couple's newborn great-granddaughter, who had been delivered prematurely on the day after Christmas. Their other son, Garry Logan, was waiting for them to arrive when he saw a story about the accident on a website and recognized the vehicle. Donald and Patricia Logan were married for 60 years.

The circumstances that caused the accident remain unclear. A spokesperson for local police said it appears that the truck driver, a 33 year-old employed with a Sydney-based trucking company, may have fallen asleep at the wheel or become distracted. He is currently hospitalized, receiving treatment for shock and minor injuries. Police also administered blood and alcohol tests, but the results are not yet available. In addition, the Daily Telegraph reports that the driver was due in court next month to answer several driving-related charges for an unrelated truck driving incident.

According to police, the truck driver reported that he swerved to avoid a student driver. However, after interviewing the driver in question (along with her father, who was a passenger), they have concluded that she did not play a role in the collision. The investigation is ongoing, and police continue to interview witnesses. Both law enforcement and the victims' families have issued public requests for information from anyone who saw anything that day.

In response, several media outlets have published editorial pieces that address a fundamental question: can cars and commercial trucks safely co-exist on highways? Worldwide, there's a wide range of views: for example, in Beijing, certain kinds of commercial trucks are banned during daylight hours. Other officials argue that implementing that kind of ban is impractical for other countries (like Australia, and the United States).

Granted, there's no way we can totally prevent all potential accidents. But we submit that there are many ways to create safer conditions for passenger vehicles, protecting them from collisions with big rigs. It certainly helps when drivers of passenger vehicles make responsible choices, like giving trucks plenty of space and staying out of their blind spots. Unfortunately - as in this instance - there's often nothing a passenger driver can do to avoid a collision with a semi-truck. That's why it's so important for trucking companies to adopt higher standards, developing procedures to keep drivers off the road if they have a history of dangerous driving behaviors. As this awful accident demonstrates, it only takes a truck driver's momentary distraction to cause irrevocable damage.