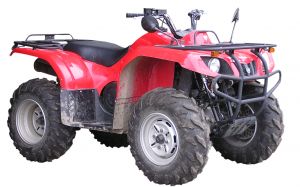 Early this morning, an Illinois woman was killed in an ATV accident near Siloam Springs State Park in Quincy. According to the Quincy Herald-Whig, 25 year-old Sara Birsic was pronounced dead at Blessing Hospital at around 1:30 a.m. today.

Deputies from the Adams County Sheriff's Department were called to the scene at 12:04 a.m. They say Birsic was riding a mule ATV as a passenger when the accident occurred. The driver of the vehicle, 30 year-old Andrew Koster, was arrested on suspicion of aggravated driving under the influence. Koster was not injured. He is currently being held without bond in the Adams County Jail. No other details about the accident have been released.

This is the second ATV passenger fatality in central Illinois in recent weeks. On September 2, 70 year-old Mary Masters was killed when the ATV she was riding struck a minivan in Stanford. Masters was not wearing a helmet, and an autopsy determined that she died of multiple head, neck and chest injuries. The driver was also injured in the collision, but his current condition is unknown. McLean County authorities currently await toxicology test results, reports the St. Louis Post-Dispatch.

• In 2010, there were 317 ATV crash deaths reported to the Consumer Product Safety Commission (CPSC). Reporting for that year is still ongoing, so the actual number of fatalities is thought to be much higher. In 2006 (the most recent year where reporting is considered complete), there were 903 reported ATV fatalities.