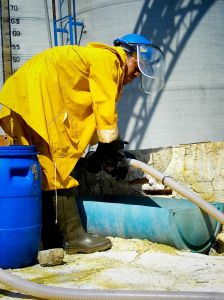 In 2009 alone, 4,551 American employees were killed on the job - which means more Americans died in the workplace during a single year than have died during the entire war in Iraq, according to a recent investigative report from iWatch News, a publication from the Center for Public Integrity (CPI). When you also consider the estimated 50,000 employees who die of occupational diseases every year, the report continues, "it's as if a fully loaded Boeing 737-700 crashed every day" in 2009.

In particular, the report addresses the death of 32 year-old Nick Revetta, a Pennsylvania worker who died in a gas explosion at U.S. Steel in 2009. Revetta sustained a fatal head injury as a result of the explosion, which threw him backwards into a steel column. He left behind a wife and two young children.

Revetta's death was investigated by the Department of Labor's Occupational Safety and Health Administration (OSHA), but the company was never fined or even cited for a workplace safety violation. Even more shockingly, Michael Laughlin, the safety inspector assigned to Revetta's case, was ignored when he sent email messages requesting help from his superiors.

Some have blamed OSHA's quota system for lapses like this one. In 2012, OSHA set a "target goal" of 42,250 safety inspections to be performed nationwide - a 5.6% increase from the 2011 target. In comparison, the total number of OSHA inspectors has remained consistent in recent years. Inspectors, then, must manage their increasing inspection "goals" along with comprehensive inspections performed in the event of a workplace death.

"My problem is at what point do we give up quality for quantity," Laughlin wrote his superior regarding Revetta's death in 2009. "I need some guidance because I'm torn and my spirit is broken because of the need to complete this case to the best of my ability." His supervisor's response, according to iWatch News, advised Laughlin to "go out and hit some [golf] balls!"

In particular, Laughlin was asking for direction regarding the numerous federal rules that are designed to prevent fires, explosions and chemical leaks in work environments: he asked OSHA to send someone with specialized training in this area, but his requests were never granted.

After two months, OSHA's Philadelphia office removed Laughlin from the case: in end, an insulation contractor was the only one cited for a violation. The contractor paid $10,763 in fines that were not connected to the explosion in any way. Then, only 10 months after the explosion that killed Revetta, another explosion at U.S. Steel injured 17 workers.