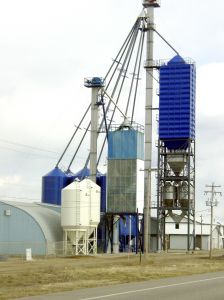 On Thursday, U.S. Secretary of Labor Hilda L. Solis announced that Bartlett Grain Company, based in Kansas City, Missouri, is now charged with several workplace violations, which led to unsafe working conditions in a grain elevator in Atchison, Kansas. Those conditions, said Solis, left 6 workers dead and 2 seriously injured. Bartlett Grain is facing 5 willful violations and 8 serious safety violations connected to an explosion in the Atchison grain elevator in October 2011: the company could be fined as much as $406,000.

The Occupational Safety and Health Administration (OSHA) charges companies with willful violations when those violations are committed with "intentional knowing or voluntary disregard for the law's requirements, or with plain indifference to worker safety and health," according to the Administration's official news release regarding Bartlett Grain.

• Allowing grain dust to build up over time (this dust is 9 times as explosive as coal dust).

• Using compressed air to remove grain dust (and failing to shut down potential ignition sources prior to that removal).

• Starting and stopping bucket elevators repeatedly, in an attempt to clear grain clogs.

• Using electrical equipment that was inappropriate for the elevator's workplace conditions.

• Failing to require employees who worked from heights to use fall protection.

Among the 8 serious safety violations are charges of improper preventative maintenance, certification, and lubrication connected to upkeep of grain handling equipment. The company is also charged with failing to provide appropriate training programs with respect to job hazards and emergency procedures, along with a "deficient" housekeeping program that did not prevent grain accumulations, according to WorkersCompensation.com. In addition, OSHA has cited Kansas Grain Inspection Services, based in Topeka, with 3 violations: one willful, one serious, and one other-than serious.