As more and more drivers are focusing on the bad habits of other drivers, many of them remain just as guilty of dangerous habits as the ones they criticize. According to a recent study, conducted by the AAA Foundation for Traffic Safety, a number of drivers are using the "do as I say, not as I do" attitude, meaning they're not at all practicing what they preach. 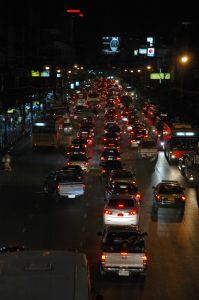 From 1985 to 2009, more than 1,055,000 lives were lost as a result of car accidents in Missouri and elsewhere in the United States. Traffic accidents are the number one cause of death for people under the age of 35. According to the U.S. Department of Transportation, more than 33,800 people were killed in traffic accidents in 2009. This means that nearly 100 lives were taken every single day on the nation's roadways.

Our Kansas City car accident attorneys understand that, according to the recent AAA study, nearly 75 percent of drivers believe that our roadways would benefit from more government attention -- including enacting new laws and enforcing current road laws. It's interesting that Americans understand the benefits of following road rules, but aren't willing to abide by them without a lawful eye watching over.

The recent study that AAA survey questioned 2,000 U.S. residents who were over the age of 15. The study was the third annual Traffic Safety Culture Index.

Here are some of the study's findings:

-Half of those surveyed have either been involved in a serious accident or have had a relative seriously injured in a traffic crash.

-More than half of study participants report that they feel less safe driving on our roadways today than they did just 5 years ago. About half of the concerned drivers cite distracted driving as one of their main fears on our roadways.

-Most drivers disapprove of alcohol-impaired driving.

-Nearly all of the surveyed drivers approve ignition-interlock devices for those who have been convicted of drunk driving more than once. About two-thirds of drivers believe these devices should be installed in the vehicles of first-time offenders.

-About two-thirds of drivers admit to talking on a cell phone while driving at least once in the last 30 days. About a third admitted to doing this on a regular basis.

-Most drivers support the use of hands-free devices over hand-held cell phones.

-About a fourth of all surveyed drivers admit to texting or sending emails behind the wheel.

-About half of drivers support a ban on using a cell phones behind the wheel. About 46 percent of surveyed drivers oppose the ban.

-Nearly half of the surveyed drivers admit to traveling at least 15 MPH over the speed limit on a freeway within the last month. About half of drivers consider it okay to do so.

-A majority of the drivers who were surveyed report that speeding is unacceptable in residential areas.

-Nearly 70 percent of drivers feel pressured into driving faster because of traffic flow on our roadways.

-Approximately 70 percent confess that they feel that more police enforcement would help to reduce speeders.

-About a third of drivers admit to driving through a red light within the last month after it already turned red. Yet most drivers report that this behavior is completely unacceptable.

The findings of this study reveal that, while most drivers understand what constitutes dangerous driving habits, they continue to engage in the acts. Until motorists are able to examine, analyze and change their own driving habits, we may see no significant reduction in the number of serious traffic accidents.

If you have been involved in a car accident in Kansas City, report the accident and keep all police and medical records. And contact a Kansas City car accident lawyer for help. Ask for a no cost, no obligation consultation.