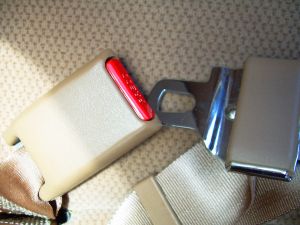 An article about a one car auto accident in the Neosho Daily News highlights the dangers of driving without buckling up. Neosho car accident lawyers have repeatedly seen the results of unrestrained drivers.

In this accident, Jessica Martin, 26, of Anderson MO apparently lost control of her 1995 Toyota on a horizontal curve near Jane. She then skidded off the right side of Missouri 90, overturned and was thrown completely out of her vehicle. IT appears that she wasn't wearing her safety belt at the time.

Martin was taken to Freeman West Hospital in Joplin with moderate injuries. This incident begs the question; would her injuries have been less severe, or possibly non-existent if she had been wearing her seat belt? Were her injuries the result of being thrown out and hitting the ground, or were they caused by her vehicle overturning? In short, would Ms. Martin have been better off if she was properly belted in?

Obviously, we have no way of knowing exactly, but there is plenty of statistical evidence about the use of seat belts in minimizing injuries. Many people believe that they are actually safer being ejected from their car after an auto accident. They are afraid that the seat belt will trap them in their vehicle, but this is a myth.

• Your chances of being killed are four to five times higher if you are thrown from your vehicle.
• If your vehicle is rolling over and you are ejected, it is highly probable that you could be crushed by your own vehicle.
• If ejected from a vehicle during an auto accident, the force of flying through the windshield or the force of hitting the ground will likely be the cause of death.
• Your seat belt protects you from being thrown into other people in the car and parts of your car such as the windshield or dashboard.
• Those in accidents who were not buckled in are more likely to be knocked unconscious, making it impossible to escape the vehicle in case of a fire or submersion in water.
• Seat belts keep the driver in their seat so they can continue to control the car, such as being able to brake or steer out of danger, assuming the circumstances of the accident allow that.

In a collision, the seats are one part of the vehicle that is likely to stay intact, no matter how badly damaged the outside may be. Therefore it stands to reason that staying in that seat would make the occupant more likely to stay intact as well. This is not just theorizing, it has been repeatedly proven. Fortunately, the National Occupant Protection Use Survey, (NOPUS) reports that nationwide, seat belt usage in 2010 reached 85%. It has been steadily increasing since 1994.

Another dangerous myth is that if you are only going a few blocks to the store, or around the corner to visit a neighbor, it is unnecessary to buckle up. However, accidents happen anytime, anywhere, in a split second. You usually do not see them coming. The Neosho car accident lawyers at Aaron Sachs continue to urge all the citizens of Neosho, Joplin, and the rest of Missouri, to buckle up each time you get into a motor vehicle. It is your life you may be saving.