Joplin MO car accident lawyers recently read about a new study that is guaranteed to feed an age old controversy--who are the better drivers, men or women? According to a new study done by University of Michigan researchers, female drivers are involved in a "higher than expected" percentage of traffic accidents with other female drivers. 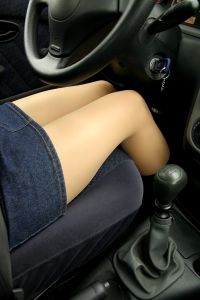 The study looked at six different car crash scenarios, using data from a nationwide sample of police reports dating from 1988 to 2007. The different scenarios studied were all based on two vehicle accidents, and considered things such as car accidents caused when one vehicle turned in front of the other, one vehicle side-swiped the other or both vehicles collided head-on, as well as speed and angle of approach.

Researchers also took into consideration the numbers of miles driven per year by women and by men. Because men drive more than women, about 60 percent the annual miles versus women driving 40 percent, the researchers expected men to be involved in a higher percentage of auto accidents in each particular scenario, road conditions and driving skills being equal.

To their surprise, Michael Sivak, research professor at the U-M Transportation Research Institute and fellow researcher Brandon Schoettle discovered that crashes involving two female drivers were higher than expected in five of the six crash scenarios. In two scenarios, crashes involving two women drivers were overrepresented by at least 50 percent more and two others by more than 25 percent greater than what was expected.

"The likelihood that a given driver will be involved in a two-vehicle crash depends on a variety of driver, vehicular and environmental factors," said Sivak,. "There are three dominant driver-related factors, including the probability of being at the wrong place at the wrong time, one's own driving skills and the driving skills of the other driver involved.

In all, success in handling on-road conflicts depends not only on psycho-motor ability but also on the outcome of complex social interactions between traffic participants. In turn, these interactions are influenced by expectations based on prior experience--and a set of common stereotypical expectations that drivers have concerning the behavior of male and female drivers."

The UofM researchers came up with some theories that might explain exactly why auto accidents between two women drivers are so much more frequent. They suggested that because women in general are shorter than men, they might have a harder time seeing out the window. Joplin car crash attorneys wonder if this theory is a bit far fetched?

However, several other studies have indicated that women are not as good at perceiving time and speed-- which are certainly abilities that would be useful while driving. Another possible explanation is that women are much more likely than men to be driving with children in their vehicles--and children are one of the biggest distractions in a car.

Having seen the results of distracted driving firsthand, the Joplin auto accident attorneys at Aaron Sachs remind everyone, whether man or woman, to make paying attention to the road your first priority. For safety, please make sure your children are either buckled up or in the proper child safety seats at all times.