October and November are some of the most dangerous months on our roadways for deer-car accidents in Butler, MO. These types of accidents can cause more than just damage to the vehicle. They can severely injure vehicle occupants as well.

Our Butler, MO car accident attorneys recommend that all drivers "think deer" whenever you're behind the wheel during this time of year. Deer can appear in the roadway and any moment, leaving motorists with just seconds to react. 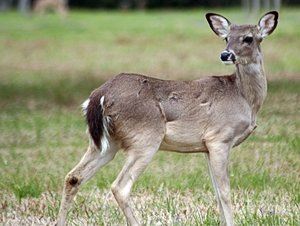 In Missouri, your chances for hitting a deer is about 150:1. The state was ranked 19th in the country for having the most number of deer-vehicle accidents from 2010 to 2011, according to The Wall Street Journal. It is estimated that there were more than 28,000 animal-vehicle accidents in Missouri from July of 2010 to June of 2011.

"It is important to stay in your lane and don't swerve when you see a deer. Most injuries and deaths occur when motorists veer to avoid the deer," said Michigan Deer Crash Coalition Chair Lori Conarton.

One of the most important and most simple safety precautions that a motorist can take is wearing a seat belt. Seat belts can oftentimes mean the difference between life and death in these types of accidents.

Tips to avoid a car accident with a deer:

-Keep an extra watchful eye out for deer during dusk and dawn.

-If you see a deer, drive safely as there are sure to be more lurking around.

-Remember that deer like to travel in single file. If you witness a deer crossing the road, you're more than likely to see another close by waiting to cross as well.

-Remember that if a deer is startled that they can dart out in any direction.

-Be cautious and drive slowly on roadways that have posted deer crossing signs.

According to the insurance company State Farm, the number of animal-car accidents fell to roughly 1 million between July of 2010 and June of 2011. This illustrates a reduction of nearly 10 percent from just a year ago. Although we've experienced a slight decrease, the risks are still very serious.

As the holiday traveling season approaches, more and more motorists will be on our roadways traveling farther distances. More driving most likely will lead to an increased number of these types of accidents.

State Farm reports that the average cost of repair for a vehicle involved in a traffic accident with an animal is more than $3,000.

November is the month that sees the most accidents with animals, according to recent statistics. State Farm reports that deer-related accidents cost the company nearly $5 billion in 2009. Nearly $4 billion was paid out for vehicle damages and the other $1 billion was for both out-of-pocket costs and medical payments.

According to the Insurance Institute for Highway Safety, there were nearly 200 roadway fatalities that were the result of a traffic accident with an animal in 2009.

If you or someone you love has been involved in a deer-car accident in Kansas City or elsewhere in Missouri, contact a Kansas City car accident lawyer at Aaron Sachs & Associates PC for help. Ask for a no cost, no obligation consultation.