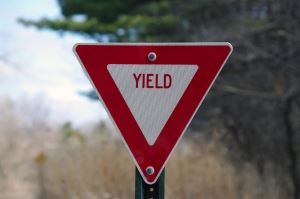 As Springfield car accident lawyers, we know that certain factors commonly play a role in injury collisions here in the Queen City. One such factor is failing to yield. In fact, failing to yield has long been a common catalyst for injury and fatality accidents - here in Missouri and nationwide.

In particular, "failure to yield" crashes and accidents involving right of way are prevalent at intersections that are equipped with stoplights that do not have left turn arrows to allow protected left turns. At these intersections - and there are many here in Springfield - drivers making left turns are always expected to yield.

According to findings from the National Safety Council, 14% of all fatal traffic accidents are caused by a driver's failure to yield. Sometimes, this behavior is associated with aggressive driving tendencies - deliberately careless behaviors that increase the risk of an accident. The American Automobile Association's (AAA) Foundation for Traffic Safety reports that these behaviors are "typically motivated by impatience, annoyance, hostility, or all of the above." In other words, a driver is frustrated by slow moving traffic, or in a hurry to make it through an intersection, or angry about another driver's actions: and, as a result, that driver makes a rash, reckless decision. However, there are also a good number of drivers who fail to yield simply because they don't understand who has the right of way.

In these situations, you are legally required to yield:

The "Yield to the Driver on the Right" rule
This guideline applies to situations where multiple vehicles approach an intersection simultaneously, and it is frequently misunderstood by Missouri drivers. If you arrive at a four-way stop sign at the same time as another vehicle, then the vehicle on the right should be allowed to proceed through the intersection first.

It's important to remember that traffic laws actually don't "give" the right of way to anyone. Instead, these laws identify specific situations where drivers must concede the right of way. As a responsible motorist, you are legally required to take actions to prevent an accident when possible, even if that means letting someone go in front of you. For example, if you approach an intersection and see a vehicle making an illegal left turn, you must attempt to stop. Speeding up - because you're angry that the vehicle is turning illegally, perhaps - is not a legally acceptable response. If an accident occurs, some measure of the fault can be transferred to you.