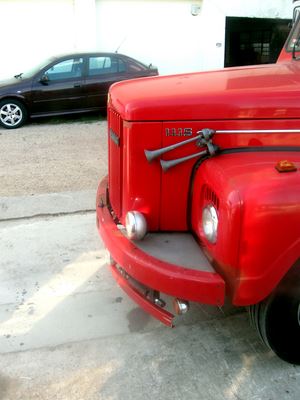 Earlier today, a semi-truck crashed into a Nevada restaurant, leaving one customer dead and three others injured. According to the Missouri Highway Patrol, it happened along Highway 71 in Vernon County at around 5:15 p.m. Authorities say a 1990 Oldsmobile Cutlass pulled from a stop sign into the path of the big rig, causing the semi-truck driver to swerve. The truck struck the Cutlass, left the roadway, and plowed through the wall and into the interior of the Quick Dine restaurant.

54 year-old Joseph Cole, a patron at the restaurant, was pronounced dead at the scene. Two other customers - 72 year-old John Becker and 60 year-old Roger Berning - were airlifted to Freeman Hospital with serious injuries. A fourth patron - 47 year-old Pamela Hoover - suffered moderate injuries and was taken to Nevada Regional Medical Center by ambulance. Several other customers reportedly sustained minor injuries but declined treatment. "A number of people either refused medical attention or said they would see a doctor," State Trooper Jim Wilde told the Nevada Daily Mail. "It's quite a mess at this point."

The driver of the Cutlass, 25 year-old Patrick Crews, and the driver of the semi, 60 year-old Daniel Coffman, were uninjured in the collision. Authorities do not believe alcohol or drugs played a role in the crash, but they tested both drivers at the scene. Crews was cited for failure to yield: law enforcement officials say he could be charged with additional criminal offenses, pending an investigation of the crash.

The Quick Dine restaurant had operated from the same location in Nevada for over 60 years.

Update, October 21: Travis Cole, Joseph Cole's son, told KCTV 5 that his father was a daily customer at the restaurant and he always sat in the exact same place. A Nevada police officer, Travis was off-duty at the time of the collision: he learned of the incident when someone called to ask if he was working the scene. "I just knew it. I knew where [my father] sits in the diner and the truck was right through there," he said. Several Nevada residents have constructed a makeshift memorial for Joseph Cole at the crash site.


In addition, the owner of the Quick Dine restaurant tells KOAM TV that the building is damaged beyond repair. It will be demolished in the weeks ahead, and the owner has not yet decided whether or not she will rebuild.

• In 2010, 3,413 people were killed in accidents involving commercial trucks, according to the Insurance Institute for Highway Safety.

• Of these deaths, 72% were occupants of smaller passenger vehicles; 14% were truck occupants; and 13% were pedestrians, bicyclists or motorcyclists.

• The Federal Motor Carrier Safety Administration's Large Truck Causation Study found that driver error was a leading cause of crashes involving semis: "An action or inaction by the drivers of the truck or the other vehicles involved were important reasons leading to crashes in a large majority" of the crashes studied, the report says.

At Aaron Sachs & Associates, P.C., our personal injury lawyers serve clients in Joplin, Missouri and throughout the surrounding areas. To contact our office, please call 1-888-777-AUTO, or visit our website.
Attorney meetings by appointment only
Categories