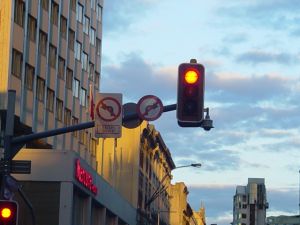 When you come up to an intersection and the light turns yellow, what do you usually do? Do you try to make it across even if you know the light will probably turn red halfway through the intersection? If you answered yes, our Missouri auto accident attorneys know you are not alone.

Apparently, red-light-running has become an epidemic throughout the United States, with disastrous results in terms of auto accidents and their related injuries. According to the National Motorist Association an estimated 200,000 red-light-running-related collisions occur at signalized intersections in the U.S. each year. Although many cities have attempted to control this problem (and raise revenues at the same time) with red light cameras, a new study shows a wide range of potential countermeasures to the problem.

Missouri has picked up on one of the most promising measures, which was implemented this year: in July, Governor Jay Nixon signed a bill standardizing the minimum length of yellow lights statewide.

Sound too simple to make any real difference? Based on a nationwide study, it was shown that an increase of 0.5 to 1.5 seconds in yellow light duration (such that it does not exceed 5.5 seconds) decreases the frequency of red-light-running by at least 50 percent.

Missouri Department of Transportation engineers have taken the results of this study seriously, and have lengthened the yellow light interval at Missouri traffic signals on state-controlled roads and highways. MoDOT officials hope that adding a few fractions of a second may reduce the number of traffic accidents at those intersections.