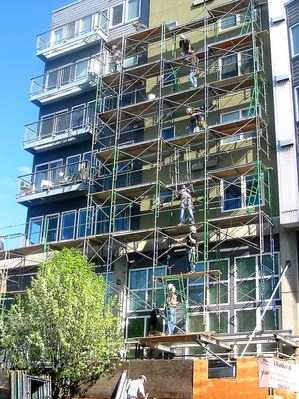 A Mississippi construction worker has died of multiple blunt force injuries after he was hospitalized for nearly a week following fall at a construction site. The Clarion Ledger reports that 43 year-old Stacy Andrew Washington was on the job at Baptist Health System at the time of the incident. Washington was reportedly wearing a harness, but the harness broke, causing Washington to fall five stories to the ground. "It was a massive fall, so you could only image," Hinds County Coroner Sharon Grisham-Stewart told the Ledger. The U.S. Department of Labor's Occupational Safety and Health Administration (OSHA) has launched an investigation into the incident.

On October 23, OSHA revealed its list of the top ten most common safety violations in 2012. The list, presented at the National Safety Council Congress and Expo, demonstrates that fall protection is a major workplace safety concern throughout the U.S.

In 2011, 4,609 American workers were killed on the job, which means about 90 workers died every week, and about 13 died each day. Of 2011 worker fatalities in private industries, 17.5% were employees in the construction industry. According to OSHA, "the leading causes of worker deaths on construction sites were falls, followed by electrocution, struck by object, and caught-in/between. These 'Fatal Four' were responsible for nearly three out of five (57%) construction worker deaths in 2011." Of the "Fatal Four," falls accounted for the largest amount of deaths in the construction industry, with 35% of construction fatalities attributed to falls.