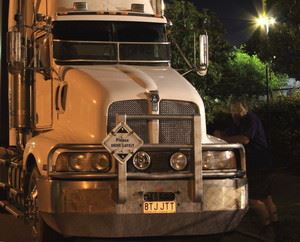 Relatives of a family killed in a fiery multi-vehicle crash have filed a wrongful death lawsuit against three semi-truck drivers involved in the incident. According to the San Jose Mercury News, the lawsuit is being brought by the parents of Christopher and Diana Schmidt, who died in the crash along with their two children and their unborn son.

The chain-reaction crash happened in western Nebraska, approximately 40 miles from the Wyoming state line, on September 9. Law enforcement officials say a semi-truck driver rear-ended another big rig that had stalled in the westbound lanes of Interstate 80. The driver of the striking truck, 27 year-old Keith Johnson, died in that collision.

As a result of the crash, traffic began to back up on the highway. The Schmidts, traveling in separate cars, were waiting in stopped traffic when a third semi-truck approached their vehicles from behind. The trucker, 36 year-old Josef Slezak, was traveling about 75 miles per hour when he slammed into the back of the Mustang driven by Christopher Schmidt. The force of the impact pushed the Mustang into the vehicle in front of it, a Corolla driven by Diana Schmidt, and the Corolla was shoved underneath another semi-truck. Both cars exploded.

The Schmidts and their two small children (3 year-old Samuel and 2 year-old Conner, who were both riding in their mother's vehicle) were pronounced dead at the scene. Diana Schmidt was seven and a half months pregnant at the time of the crash.

An official investigation of the accident revealed that driver fatigue was a major contributing factor, reports the Nebraska Radio Network. State Troopers determined that Slezak never hit his brakes or attempted an evasive maneuver prior to hitting Christopher Schmidt's Mustang. Officials believe Slezak likely fell asleep at the wheel.

The wrongful death lawsuit filed on behalf of the Schmidt family alleges that Slezak had been driving for almost 15 hours prior to the crash - which means he violated federal laws designed to control the maximum time truckers can be on-duty without rest. In addition to Slezak, the lawsuit also names the following parties:

• Truck driver Vladimir Zhukov and his employers. Zhukov was the driver of the truck that stalled on the highway, causing the first collision. The suit maintains that Zhukov failed to move his trailer from the highway and to keep his truck properly maintained.

• The employers of Keith Johnson, the driver who struck Zhukov's trailer and died in the first crash. The suit says Johnson was negligent in striking Zhukov's truck even though the vehicle had emergency warning lights activated.

Slezak has also been criminally charged in connection with the accident. He faces nine felony counts: four manslaughter charges, four vehicular homicide charges, and one charge of vehicular homicide of an unborn child. While awaiting trial, Slezak remains incarcerated on a $1 million bond.

At Aaron Sachs & Associates, P.C., our wrongful death lawyers assist families who have lost loved ones in Missouri auto accidents. We serve clients in Joplin and throughout the surrounding areas, including Carthage, Webb City, Sarcoxie, Carl Junction, Lamar, Pierce City, Noel, Neosho and Nevada. If you'd like to schedule an appointment for a free initial consultation, please call our office toll-free at 1-888-777-AUTO. You can also visit our website to learn more about our firm, or to contact us online.
Attorney meetings by appointment only
Categories