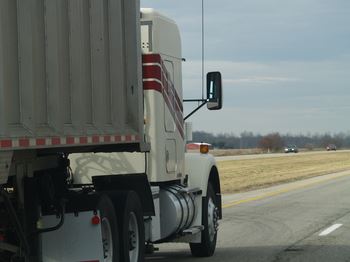 Last week, a Missouri man was killed and 4 others were injured after a head-on collision with a semi-truck. It happened on Thursday evening in Callaway County: 24 year-old Jason Hopkins was traveling west on Interstate 70 near Kingdom City when he lost control of his 2001 Pontiac, crashed through the cable median barrier, and drove into eastbound traffic. He collided with a tractor-trailer head on.

A passenger in the Pontiac - 22 year-old Erskin L. Johnson - was pronounced dead at the scene of the accident, according to the Missouri Highway Patrol. Hopkins was taken by ambulance to University Hospital in Columbia with moderate injuries. The vehicle's 3 other occupants were seriously injured: 18 year-old Mary A. Chapman and 21 year-old Marcus L. Singleton were airlifted to Columbia; 15 year-old Bryana J. Jordan was transported by ambulance. No one was wearing a seat belt. The driver of the semi-truck, 64 year-old Charles M. Boerstler, was not injured in the crash.

As of this morning, KRCG 13 reported that 2 of the injured have since been released, and that Hopkins' condition has been upgraded to good. The accident remains under investigation - it is not known what factors may have caused Hopkins to lose control of his vehicle.

Sergeant Paul Reinsch, spokesperson for Troop F of the Missouri Highway Patrol, said that cable barriers are usually an effective tool in preventing median crossover crashes. "We have very few that go through," Reinsch said. "Normally when they hit them at an angle, [the barrier] grabs onto them."

Missouri has used cable median barriers for about 12 years: there are currently 550 miles of barriers on our state's roadways. Indeed, cable median barriers have proven to be safer than concrete dividers and guardrails, according to the Federal Highway Administration (FHWA). However, there's been some disagreement about whether or not this method is cost-effective: the barriers are relatively inexpensive to install, but repairs can become more costly. And these repairs are needed regularly: last year, on I-70 alone, the cable median barriers took nearly 700 hits. From MoDOT's perspective, this statistic represents hundreds of lives saved.

But of course cable median barriers aren't a fail-proof solution to the problem of median crossover crashes, as the Callaway County accident demonstrates. When they occur, median crossover crashes tend to result in head-on (or nearly head-on) collisions, which are notorious for causing serious injuries and fatalities, even between passenger vehicles. When a semi-truck is involved in a crash, the stakes are automatically higher.

Here are a few common causes of head-on collisions:

• Driving under the influence of alcohol or drugs
• Driving while distracted
• Driving while drowsy
• Irresponsible or illegal passing on 2 lane roads
• Speeding (especially around a curve), which can lead to overcorrection and lane departure

We don't yet know what caused this tragic accident, but in general, we know all too well that passenger vehicles are no match for big rigs. As Missouri drivers, it's crucial that we're aware of the dangers posed by collisions with these massive vehicles, and that we're diligent about staying out of their way.