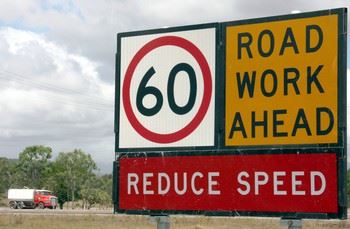 Here in Springfield, our drivers are no strangers to work zones. In recent years, we've seen massive projects on heavily traveled roadways, including Highway 65, James River Freeway, Kansas Expressway and Campbell Avenue, just to name a few. While the end results have meant drastic improvements to traffic flow, the construction process can be frustrating to drivers. Unfortunately, it can also create an increased risk for car accidents.

April 19: Last Thursday, a chain reaction accident on Highway 6 near Novinger, MO caused minor injuries to 3 drivers - and major traffic headaches for several others. The Missouri Highway Patrol reports that two vehicles were stopped at the edge of the work zone, waiting to be flagged through a one-lane section of roadway. A third vehicle approaching the zone rear-ended the second car, causing it to strike the first car. All 3 drivers were taken by ambulance, treated at a local hospital, and released.

April 20: A driver was killed last Friday morning in the Interstate 270 work zone (between I-44 and Manchester Road, in St. Louis County). 37 year-old Ronald Schuh was traveling north when another vehicle changed lanes and struck his car. The force of the impact caused both vehicles to travel across all 4 lanes of traffic: Schuh's car was thrown into a rock bluff, where it overturned. The second vehicle eventually collided with a median wall and a parked Missouri Department of Transportation truck. Schuh was taken by ambulance, but he later died as a result of his injuries. The Highway Patrol's crash report does not list the second driver as being injured. Traffic was backed up for several hours after the accident.

As summer approaches, Missouri drivers can expect to see even more construction work zones on roadways throughout the state. According to KCTV 5, MoDOT is planning to begin construction on more than 800 Missouri bridges in the months ahead - almost every bridge in the state will see new construction. Safety practices in these areas, then, will be of the utmost concern to Missouri drivers.