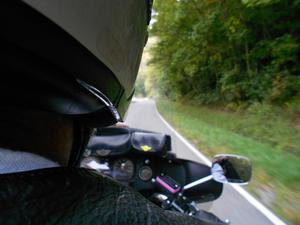 The weather has been pretty nasty in recent weeks, but local weather forecasts indicate that warmer temperatures are on the way. It won't be long before drivers can expect to see Missouri motorcyclists back on the road in increased numbers. Since there's little to no motorcycle traffic during the winter months, many drivers have forgotten all about motorcyclists by the time riding season rolls around. In this post, our Springfield lawyers discuss five key points that motorists should keep in mind when sharing the road with motorcyclists.

Risk factors & motorcycles: What other drivers should remember when traveling near riders

• Motorcyclists lack the protection of an enclosed vehicle. When accidents happen, passenger vehicle occupants are afforded a level of protection from a vehicle's outer structure and safety devices, which include airbags and seat belts. Since there's virtually nothing between a rider and the road, motorcyclists are extremely vulnerable to injury when they're involved in collisions. Accidents with minor consequences for car occupants can have extremely serious implications for motorcycle riders.

• Motorcycles are less visible than cars. All too often, motorcycle accidents occur because a driver simply didn't see the motorcycle until it was too late to avoid a collision. Because they're smaller and narrower than other vehicles, motorcycles can easily disappear into blind spots or be obscured by objects on or along the road. Always look twice for motorcycles, especially when you're turning or changing lanes - it really might save someone's life.

• Motorcyclists must make sudden adjustments for roadway conditions and hazards. Being prepared for the unexpected is a key part of defensive driving for all motorists. However, common hazards like loose gravel, wet pavement, and uneven train tracks can be extremely dangerous for riders. For this reason, motorcyclists are often required to make sudden adjustments (like slowing down or changing lane position) when they encounter these conditions. Be alert when you're following riders, and expect them to make such adjustments as needed.

• Motorcycles are less stable than passenger vehicles when performing emergency maneuvers. Because they only have two wheels, motorcycles are trickier to handle than cars and trucks when they're forced to swerve or stop suddenly. Always allow riders plenty of room, just in case an unexpected situation or obstacle presents itself.