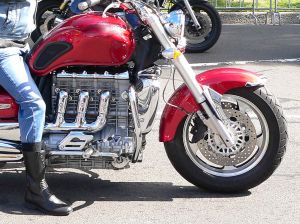 In Missouri, throughout 2010, there were 1,731 injury accidents involving motorcycles, which left 2,036 people injured, according to the Missouri Highway Patrol. An additional 94 fatal crashes occurred, resulting in 97 deaths. April has barely begun, and our Joplin, Missouri auto accident lawyers have already written about several fatal crashes involving motorcyclists. So far, in 2012, the Patrol is reporting that fatal Missouri auto accidents in general are on the rise: here in southwestern Missouri, Troop D has seen a 65% increase, compared to this time last year.

See our recent posts: Recent Motorcycle Accidents Cause Injuries, Fatalities in Webster County, Missouri & Throughout the Ozarks and Fatal Accidents Highlight the Importance of Motorcycle Safety in Kansas City, Missouri.

But Missouri riders aren't the only motorists who are vulnerable to fatal crashes. Last Sunday evening, in Perry County, Illinois, a passenger vehicle caused an accident that resulted in 1 death and caused injury to 9 others. It happened just after 5:00 p.m., when 43 year-old Thomas Harris attempted to pass a northbound van, just as 6 southbound motorcycles approached. Harris did not fully complete the pass before he attempted to move back into the northbound lane, and subsequently sideswiped the van. The impact caused his pickup to spin out of control, slinging it back into southbound traffic - and into the group of motorcycles.

Harris' pickup truck struck a Harley carrying a passenger, and both riders were injured. The remaining motorcyclists, who were traveling in a standard staggered formation within their lane, were forced to take evasive action: as a result, 3 went to the pavement. 56 year-old Arlene Hackworth, a passenger on one of those three motorcycles, was killed.

Meanwhile, after striking the motorcyclists, the pickup continued off the west side of the road and rolled over. By the time it came to rest in a field, the vehicle was nearly a quarter of a mile away from the location of the initial impact.

3 helicopters came to the scene to transport the some of the injured, including a 13 year-old passenger in the pickup, and 2 motorcyclists: 38 year-old Scott E. Meadows; and 35 year-old Derek Clay Jenkel, who was driving the Harley that carried Ms. Hackworth. All 3 suffered major injuries. Several other riders and 2 passengers in the pickup truck were taken by ambulance to St. Louis hospitals.

Harris was arrested for DUI after failing a sobriety test at the scene of the accident. He also faces multiple other charges, including endangering the life of a child and failure to reduce speed to avoid a crash. 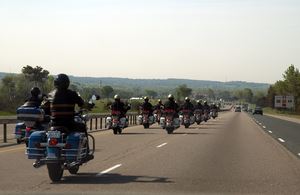 When accidents happen, motorcyclists are considerably more vulnerable to serious injuries than the occupants of closed vehicles (like cars and trucks). And sometimes, a crash is absolutely unavoidable. However, there are also times when smart thinking and skilled maneuvers can mean the difference between a rider's life and death. Certain factors - like roadway conditions or carrying a passenger - affect the way a motorcycle will handle. Keeping your riding skills fine-tuned is the best way to protect yourself and your passengers.

Here are a few safety tips to help you ride safely when carrying a passenger:

• Always wear a helmet (and insist that your passengers wear helmets as well).

• Check your owner's manual to confirm that your motorcycle is actually made to hold a passenger. Not all motorcycles are made for a driver and a passenger.

• Remember that riding with a passenger is quite different from riding alone: if you haven't carried a passenger before, you should practice in a parking lot first.

• Review the safety tips in your owner's manual (even if you've read them before) or take a class to brush up on your knowledge.

• Do not allow a young child to ride as a passenger until that child is old enough to reach the foot rests, hold on to you consistently, and can be trusted to follow instructions quickly and consistently.

• Before your passenger mounts the bike, be sure you communicate basic safety instructions such as to hold on, limit movement, keep legs and feet away from (hot) muffler, and limit movement.

• Start your engine before the passenger mounts, and observe any weight conditions that may be changed by having a passenger (such as extended wind effect, passing times and stopping distances).

• Check your brakes each time you get on your motorcycle.