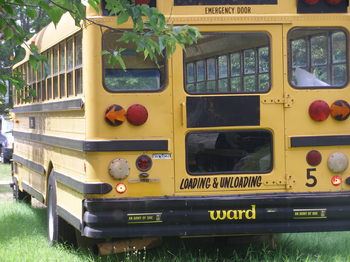 In recent months, it seems that there have been all too many crashes involving school buses - our Missouri truck accident lawyers have written about these wrecks at length. However, this week, we were amazed to hear about a school bus crash that was averted when a couple of 13 year-old boys acted swiftly and bravely to protect their classmates.

It happened in Milton, Washington, on the first day school was back in session after spring break. Surveillance footage from the bus's camera system shows the driver's hands suddenly flailing and his eyes rolling back into his head, and then he slumps to the side - later, it would be determined that he'd had a seizure. Seconds later, the footage shows a student - 13 year-old Johnny Wood - pointing at the driver and jumping up. In the background, students can be heard yelling "Oh my God!" and "Call 911!" and "Take the keys out of the ignition!"

The bus appeared to be out of control at that point - and headed directly for a church. Then another student - 13 year-old Jeremy Wuitschick - came running up the aisle. Wuitshick grabbed the wheel, removed the keys, and steered the bus to the side of the road. In the meantime, Wood, who had Red Cross first aid training, started chest compressions on the driver.

"I ran up and tried doing chest compressions, but his eyes were rolling back and I could tell it was getting harder for him to breathe," Wood told reporters.

"I was just thinking, 'I don't want to die.' I turned to the right. Turned to the side of the road. Took the keys out of the ignition. We started slowing down," Wuitshick said.

Eventually, the bus struck a curb and came to a stop - but it collided with no other vehicles, and no students were injured. The episode occurred just as the driver was approaching the school, and a teacher was able to jump onboard and assist with CPR almost immediately. Also, thanks to several student passengers who called 911 right away, several medics were able to respond quickly.

The bus driver, a 43 year-old substitute, is reported to be in grave condition at a local hospital.

According to Fife Deputy Schools Superintendent Jeff Short, students are required to review emergency bus safety practices on a regular basis - including protocol for when a driver becomes incapacitated. "It's just for this type of situation. I think they did an outstanding job," Short said. And Police Chief Bill Rhoads agreed, pointing out that Wuitshick's actions likely prevented a terrible crash. "We're just happy the kid was thinking on his feet," Rhoads said.

It's always worth reviewing safety practices with your children: would they know how to react if faced with a situation like this one? As these circumstances demonstrate, such predicaments are completely unpredictable, and being prepared can make all the difference in the world.