Missouri truck drivers have a number of problems to keep at bay while operating their large, commercial vehicles. One of the most dangerous may be drowsy driving, or sleep apnea in many cases. Take one trucker in the news for example, who doctors have diagnosed with severe obstructive sleep apnea. This is a dangerous disorder because not only is he at an increased risk for other health problems, but he's at a great risk for falling asleep at the wheel, according to MSNBC.

"It was mild, but has worsened as I have gotten older," says the 330-pound driver. 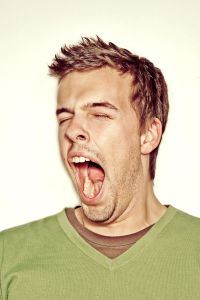 He wears a mask when he sleeps that helps him to restore his oxygen levels every night. He's taking preventative measures to avoid a serious accident. Our Missouri trucking accident attorneys understand that many truck driving companies do not screen their drivers for sleep apnea or any other sort of sleeping disorder. They also do very little to keep sleepy drivers off our roadways, often throwing them behind the wheel regardless of their condition just to make deadlines.

For this reason, sleep scientists at Harvard University have renewed a request for federal rules that would require mandatory testing of obese drivers, since they're most likely to be diagnosed with sleep apnea. These researchers have concluded that there is indeed a strong link between overweight drivers and sleep apnea. They propose that just a simple screening could help to prevent a number of truck crashes -- such accidents that take the lives of more than 5,200 people each year in the United States.

This is nothing new though. The Federal Motor Carrier Safety Administration has been looking into a rule that would require screening for drivers whose body mass index (BMI) exceeds 30 for years now.

A BMI of 30-year-old male means 221 pounds for a 6-foot man. The driver in the MSNBC article had a BMI of 43. Researchers believe that more than 40 percent of commercial truck drivers have a BMI of 30 or higher.

Trucking companies are resisting. A majority of the industry is rejecting such comments as mere scare tactics. They report that the number of bus and truck accidents have remained at a steady 161,000 or for the past several years despite the increased in miles traveled.

"There is no direct relationship between a person's body weight and his ability to drive an 18-wheel truck," said Tom Weakley, director of operations for the Owner-Operator Independent Drivers Association, which represents about 160,000 drivers. "Show me where that's a better predictor than a person's driving record."

It is estimated that nearly one in three drivers is currently suffering from sleep apnea, a condition that increases the risk of a serious accident by up to seven times. It is also estimated that roughly 20 percent of truck accidents involve a sleeping driver.

"We are taking the Medical Review Board's recommendations under thoughtful advisement, and supplementing those recommendations with additional research in order to develop sound regulatory proposals," Candice Tolliver, an agency spokeswoman.

Sleep apnea is a public safety issue that even the American Trucking Associations recognizes. The group supports the idea of guidance to detect and correct the problem of sleepy drivers.

The average cost for a fatality that results from an accident with a large truck equals nearly $4 million. An accident that results in injury can cost nearly $200,000.

"I don't think there's a CEO that doesn't know that screening for sleep apnea banks your safety dollars," she said. "But there's a balance that needs to be met."

As of now, the only way sleep apnea is detected is through an easily dodged question on a certification exam. A majority of truck drivers with sleep problems will ignore referrals for sleep studies and the treatment in an attempt to hold on to their license. Their trucking license can be revoked if these conditions are discovered.

"Truckers have quite a fear of disclosing that they get sleepy when they drive because it might mean their livelihood," said Wendy Sullivan, vice president of Precision Pulmonary Diagnostics, a Houston company that created a sleep apnea screening tool used by at least two trucking firms that have started testing their drivers.

What you can do to avoid sleep apnea:

-Lose weight. You chance of being diagnosed increases as your weight increases.

-Sleep on your side or stomach. A number of people suffer from sleep apnea only when lying on their backs. Try using pillows to avoid sleeping on your back.

-Quit smoking. Smoking only increases both the risk and the severity of sleep apnea. Smoking only swells and creates excess mucus in the airways and by damaging the lungs.