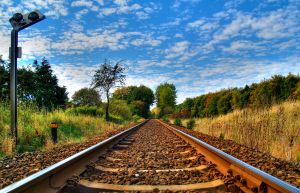 Recently, officials from the Federal Railroad Administration announced that train accidents are on the decline here in Cape Girardeau, Missouri and nationwide. In 2012, train accidents fell by 16.5%, making the year "the safest year in railroad history." However, as the St. Louis Post-Dispatch reports, collisions involving trains and pedestrians actually increased by 7.5% in 2012, while pedestrian injuries rose by 10.4%. Authorities say many of the 2012 train accidents involving pedestrians occurred simply because of individuals walking on the tracks. In fact, within less than two months last summer, two teens died while walking along train tracks in the St. Louis area - both were reportedly wearing earbuds and likely didn't hear the train coming.

"We are gratified with the continued improvement in highway-rail grade crossing collisions, but educating a distracted public in order to reduce trespassing injuries and fatalities continues to be a challenge," said Joyce Rose, CEO of Operation Lifesaver, a non-profit organization that promotes rail safety.

• Remember that railroad tracks, trestles, yard and equipment are considered private property. From a legal perspective, you are guilty of trespassing if you are in a rail yard when uninvited by a railroad official. And more importantly, you're also at risk of serious, life-threatening injury.

• Don't attempt to cross train tracks on foot unless you are at a designated public crossing marked by flashing red lights, a gate or a crossbuck.

• Walking next to train tracks can also be extremely risky. Pedestrians should note that trains can overhang the tracks by three feet or more, and loose straps on rail cars may extend even further.

• Distractions can add to a pedestrian's injury risks. In fact, a growing number of train/pedestrian collisions occur because the pedestrian is wearing earbuds or headphones and simply can't hear a train as it approaches. A study from the journal Injury Prevention found that trains are the main type of vehicle involved in fatal crashes involving pedestrians wearing headphones. The study cites several cases where "the cars or trains were sounding horns that the pedestrians couldn't hear, leading to fatalities in nearly three-quarters of cases."

At Aaron Sachs & Associates, P.C., our personal injury lawyers represent car accident victims throughout the state of Missouri. We serve clients in Cape Girardeau and throughout the surrounding areas, including Poplar Bluff, Van Buren, New Madrid, Sikeston, Caruthersville, Perryville, Ste. Genevieve, Farmington, Dexter and Potosi. If you've been injured in a Missouri crash, contact us today to find out if we can assist you with a personal injury claim. Our firm works on a contingent-fee basis, and we offer a free initial consultation to discuss your case. To schedule an appointment, call our office toll-free at 1-888-777-AUTO, or submit our convenient "Do I Have a Case?" form online.
Attorney meetings by appointment only
Categories