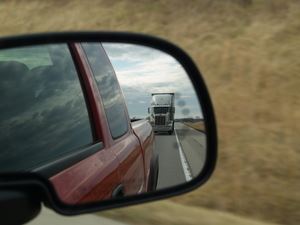 Recently, six family members were killed on I-65 in Kentucky when a semi-truck rear-ended a Ford Expedition. According to FOX6 News, the Expedition burst into flames upon impact and then rear-ended the car in front of it, a Toyota Camry. Authorities say the deceased were all occupants of the Expedition: James and Barbara Gollnow, both age 62; their friend, 92 year-old Marion Champnise; their 18 year-old daughter, Sarina; and their two foster children, 10 year-old Gabriel Zumig and eight year-old Soledad Smith. Two other children - also foster children of the Gollnows - were able to escape the vehicle and survive the crash, but both suffered injury. The family was reportedly traveling home to Wisconsin after taking a vacation in Orlando, Florida.

The driver of the Camry was also injured in the accident, but the semi-truck driver was not hurt. Local police have not yet determined what factors contributed to the crash, but FOX6 reports that "distracted driving is among the causes being investigated." Police told the Milwaukee Journal-Sentinel that the truck driver said "he saw the vehicle that was in front of him and he hit the brakes and he didn't hit them in time...There was a reason for that and we're trying to figure out what the reason was."

• According to the Insurance Institute for Highway Safety (IIHS), 3,373 people were killed in 2011 accidents involving large commercial trucks. Of that number, 66% were the occupants of other passenger vehicles; 16% were pedestrians; motorcyclists or bicyclists; and 16% were semi-truck occupants.

• When faulty brakes are combined with a semi's required stopping distance, the result can be deadly. A FMCSA study of Michigan semi-truck accidents indicated that over 53% of semi-trucks that rear-ended other vehicles had a least one brake safety violation.

Aaron Sachs & Associates, P.C. is a personal injury law firm that represents the victims of Missouri semi-truck accidents. If you or a loved one has been injured in an accident involving a large truck or other commercial vehicle, it may be beneficial to discuss your legal rights with an experienced attorney. Our firm works on a contingent-fee basis, and we offer a free initial consultation to discuss your case and answer your questions. To schedule an appointment, please call our office toll-free at 1-888-777-AUTO. You can also visit our website to learn more about our firm, hear from our clients, or contact us online. Offices in Springfield, Joplin, Columbia, Cape Girardeau and Kansas City.
Attorney meetings by appointment only
Categories