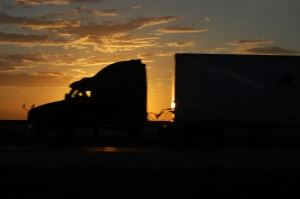 Both state and federal crash data has proven, time and time again, that young drivers have the highest risk of involvement in car accidents that result in injury. Because they lack experience, teenagers have a more difficult time assessing roadway situations and responding to them in a safe and prudent manner. When a teen driver is involved in a collision with a large commercial vehicle, like a semi-truck, our Missouri truck accident lawyers know that the stakes are even higher.

Recently, an Iowa teenager was killed when his SUV was struck by a semi-truck and subsequently rolled over into a ditch. According to the Des Moines Register, 17 year-old Rodrigo Lopez was eastbound on Interstate Highway 80 when he attempted to merge into the right lane and was struck by a semi already traveling in that lane. Lopez was taken from the scene by ambulance, but he later died as a result of injuries sustained in the crash. Another semi traveling nearby was also damaged by debris created by the initial collision, law enforcement officials report. Investigation into the crash continues.

• Auto accidents are the leading cause of death for American teenagers, according to the Centers for Disease Control and Prevention. Approximately 2,700 teens between age 16 and 19 were killed - and about 282,000 were injured - in 2010 auto accidents.

• While young people between age 15 and 24 only account for about 14% of the U.S. population, they represent about 30% of total costs connected to auto accident injuries nationwide.

• Drivers between age 16 and 19 are the most likely to be involved in car accidents: per mile driven, they're three times more likely to crash than older, more experienced drivers.

• Unsupervised teen drivers are more likely to crash when they're driving with teen passengers on board - and the crash risk increases in accordance with the number of passengers.

In Missouri, teens between age 16 and 18 are eligible for an intermediate license after they have held an instruction permit for at least 182 days. That license comes with several restrictions: during the first six months, teens are prohibited from driving with more than one passenger under 19, unless a passenger is an immediate family member. After six months, teen drivers may carry no more than three passengers who are under 19 and who are not members of their immediate family. Click here to learn more about Missouri's graduated driver license law.

At Aaron Sachs & Associates, P.C., our truck accident lawyers represent injury victims throughout the state of Missouri. If you or a loved one has suffered injury in an accident caused by a careless or negligent trucker, it may be beneficial to seek legal advice from an experienced personal injury lawyer. Our firm maintains offices in Springfield, Joplin, Columbia, Cape Girardeau and Kansas City, and we offer a free initial consultation to discuss your case and answer your questions. To contact our office, please call us toll-free at 1-888-777-AUTO, or visit our website to submit our convenient "Do I Have a Case?" form.
Attorney meetings by appointment only
Categories