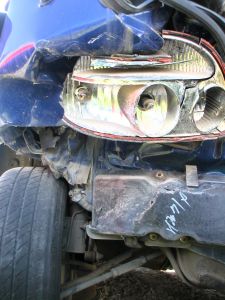 An investigation of a recent fatal accident that happened near Mountain Home, Idaho has revealed that following too closely, excessive speed and distraction all contributed to the collision. Drivers in southeast Missouri can learn from this senseless accident, which was caused by several common driving behaviors and claimed a young life. Rear end collisions are one of the most common kinds of car accidents, and - as in this instance - the outcome can be fatal.

In January, 18 year-old Taylor Sauer was killed when she rear-ended a slow moving semi-truck on the interstate: after the initial impact, Sauer's car was struck from behind by another semi. She was pronounced dead at the scene. Lieutenant Sheldon Kelley, of the Idaho State Police, says Sauer was commuting home from Logan, Utah, where she attended college.

The investigation of the accident scene revealed that Sauer was traveling 88 mph when she struck the semi, and that she was following the truck too closely. The semi, which was pulling a tanker trailer, was forced to slow while going up a long grade. Police believe that Sauer was distracted and didn't notice the truck slowing: her phone records show that she had been sending text messages and Facebook updates in the minutes leading up to the crash. Tragically, one of her last Facebook posts reveals that even she knew she wasn't driving responsibly: "I can't discuss this matter now. Driving and Facebooking is not safe!" She and her friends had been discussing Tim Tebow and the Denver Broncos.

Rear end collisions are most commonly caused by driver distraction or by driver aggression. Both distracted and aggressive drivers are prone to certain dangerous driving behaviors, particularly tailgating, or following too closely.

Following too closely is defined by the National Highway Traffic Safety Administration and in the Missouri Driver Guide as" following another vehicle so closely that even if the driver is attentive to the actions of the vehicle ahead he/she could not avoid a collision in the circumstance when the driver in front brakes suddenly." And of course, if the driver is inattentive, the collision is all the more inevitable (and all the more severe).

Allowing yourself a safe stopping distance affords you more time to make safe, well-planned decisions while you are driving. If you give yourself enough space, you should be able to scan along the sides of the road and into the other lanes. You should also be able to look far enough down the road to view traffic conditions ahead of the vehicle immediately in front of you. This distance gives you the time to react, and, if needed, to avoid running into the back of the vehicle you are following. Preserving this distance is one of the best ways to avoid a car accident.

Note that three of these causal factors were present, in some degree, in Taylor Sauer's accident.

How to Determine the Correct Following Distance:
Select a fixed object on the road ahead, such as a sign, bridge, or overpass. As the vehicle ahead of you passes the object, start counting slowly: "one one-thousand, two one-thousand, three one-thousand." If you reach the same object before you finish counting, you are following too closely. Adjust your speed and try again.

3 Second Rule for Following:
Follow the three second rule on dry roads that are in good condition with low traffic volume. Double the three second rule to six seconds in bad weather, heavy traffic, or when driving at night. And if the weather is very poor - heavy rain, fog, or snow, you should triple your following distance and use a nine second following count.

Sometimes it's tempting to follow too closely - and we're all probably guilty of doing it at one time or another. It's especially hard to maintain a safe following distance in heavy traffic. However, we would all do well to remember the possible consequences every time we speed up to close the gap in front of us.

For more information about different kinds of car accidents and personal injury claims, visit our website.