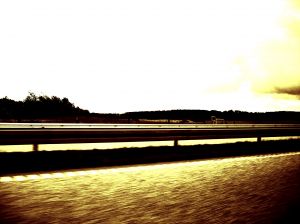 A Sunday drive turned deadly for a family in New York: 3 generations of relatives were killed yesterday in the city's deadliest car crash since March 2011.

It happened on New York's busy Bronx River Parkway. A 2004 Honda Pilot was traveling south when it hit a center median, causing it to bounce off the concrete wall and hurtle across three southbound lanes, leaving a line of skid marks behind it. Then, the SUV struck a curb, which propelled it over the top of a guard rail. The guardrail was undamaged. The SUV plunged 60 feet into an area of dense brush in the Bronx Zoo.

To watch the Today Show's coverage of the accident, including a video simulation of the crash, click here.

All 7 occupants - relatives, heading to a family party - were killed on impact. Among the dead were the driver, 45 year-old Maria Gonzalez; her parents, 85 year-old Jacob Nunez and 81 year-old Ana Julia Martinez; her daughter, 10 year-old Jocelyn Gonzalez; her sister, 39 year-old Maria Nunez; and her nieces, 7 year-old Niely Rosario and 3 year-old Marly Rosario. The family was less than 5 miles from their home when the crash occurred, and they were all wearing seatbelts. Jacob Nunez and Ana Julia Martinez had arrived in the U.S. only 3 days before the accident: they had come from the Dominican Republic to visit their children (they had 13, 6 of whom live in the U.S.).

The site where the SUV landed is a wooded area of the Bronx Zoo that is closed to the public. No animal exhibits are in the vicinity.

Police do not yet know what caused Maria Gonzalez to lose control of the vehicle: it was a sunny day, the roads were dry, and no other vehicles appeared to be involved. At present, police speculate that the vehicle's speed - around 70 miles per hour - may have been a contributing factor. "Obviously, the vehicle was traveling at a high rate of speed," said Ronald Werner, FDNY's Deputy Chief. "It hit something that caused it to become airborne." Some witnesses reported that a tire blew on the SUV, but police have not yet confirmed that. The New York Times reports that there were no visible skid marks on the roadway before the SUV initially collided with the concrete median.