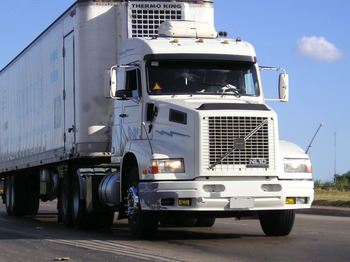 On Wednesday afternoon, there were two serious accidents involving semi-trucks within a three mile stretch of Kentucky highway - and they happened just hours apart.

Both crashes happened on Interstate 75 in Whitley County, just north of the Tennessee state line. At around 1:27 p.m., a southbound tractor trailer driven by 62 year-old James B. Hamilton rear-ended another semi-truck. Hamilton was seriously injured: he sustained facial and rib fractures, and a partially collapsed lung. He was airlifted a Knoxville hospital, where he remains in intensive care, though his condition has been upgraded to stable.

To put it mildly, cleaning up the accident scene was somewhat complicated. Hamilton's truck was en route to multiple Subway restaurants in North Carolina: it was loaded with 40,000 pounds of salami, which spilled onto the interstate. It took crews nearly three hours to clear the sandwich meat and crash debris, which caused southbound traffic to back up considerably during that time.

This traffic jam was the catalyst for a second accident which involved two semi-trucks, an RV pulling a trailer, a van and a pickup truck - and that crash proved to be fatal.

At around 3:27, a semi crashed into a pickup truck that had slowed in response to the traffic congestion caused by the earlier accident. The semi pushed the pickup into a van, shoving both vehicles out of the way, and then proceeded to strike an RV and another semi-truck before finally coming to a stop. The RV's trailer was hauling three dragsters, a muscle car and racing fuel. The impact caused a massive explosion.

Both the trailer and the second semi caught fire. Brian Folk, an occupant of the RV, described the sound of the fuel tanks and tires exploding to WKYT 27. "It sounded like a land mine going off every one minute," he said. There was also a fire in the cab of the first semi.

The RV's occupants had to kick the doors open to escape the vehicle. A bystander saw the second semi on fire and pulled the driver, who was pinned inside, from the wreckage.

The Kentucky State Police reports that one person was killed and three others were injured in the crash, according to the Times-Tribune. Two of the injured were taken from the scene by helicopter, and one was taken by ambulance. Amazingly, 5 others - all occupants of the RV - escaped injury. None of their names have been released. According to police, the driver of the first semi appears to be at fault, but they have not yet filed any charges, and the accident remains under investigation. I-75 was closed for several hours following the crash, but it has since reopened.

According to the Insurance Institute for Highway Safety (IIHS), in 2010, 3,413 people were killed in collisions involving large trucks. Braking capability is a common factor in these accidents: when compared to passenger vehicles, semi-trucks typically take 20-40% farther to stop.

The truck accident lawyers at Aaron Sachs & Associates, P.C. represent injury victims throughout Missouri: for your convenience, we have offices in Springfield, Joplin, Cape Girardeau, Columbia, and Kansas City. To contact us, call 1-888-777-AUTO, or visit our website.