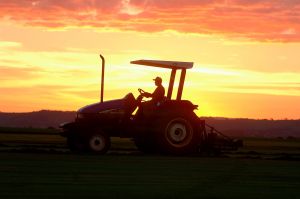 On September 17, a Pennsylvania man died and three others were injured in a serious crash involving four vehicles, including a farm tractor. According to the Reading Eagle, 33 year-old John Strunk was killed as he attempted to pass the tractor in a no-passing zone on Route 419 in Berks County. His vehicle struck another car head-on. Strunk was pronounced dead at the scene. In addition, one person was airlifted to a nearby hospital, while the two other injury victims were transported from the scene by ambulance.

And on the same day, an Illinois motorcyclist was critically injured when he collided with a grain trailer on Highway 20 near Dyersville, Iowa. The WCF Courier reports that 23 year-old Robert Hansen was life-flighted to Iowa City after he rear-ended the trailer: the impact ejected Hansen from his motorcycle.

It's harvest season, which means drivers can expect to see an increased number of farm vehicles on public roadways throughout the nation. And that's especially true here in Missouri: according to the Missouri Highway Patrol, there were 231 traffic accidents involving farming vehicles in 2011. Three drivers were killed, 17 were injured, and 10 passengers on tractors were also injured.

"We encourage everyone, whether they live or will be traveling through a farming community, to stay alert and drive courteously," said Colonel Ron Replogle, superintendent of the Highway Patrol, in a recent news release. "Motorists should watch for farm implements on the roadway this time of year. Farmers need to be extra vigilant while on the roadway during the harvest season."

Sharing the road with farm machinery: Tips for Missouri drivers

• Remember that it's harvest season. Be prepared to encounter farm vehicles and machinery on Missouri roadways.

• Be patient. When you approach a slow-moving farm vehicle from behind, lower your speed immediately. Never, ever try to pass one of these vehicles until your view is unobstructed, and you can be certain you're not pulling into the path of oncoming traffic. Do not pass on hills or roadway curves.

• Watch for farm vehicles turning left. According to the Highway Patrol, many harvest season collisions occur when drivers try to pass slow-moving farm vehicles that are attempting to turn left. Often, drivers assume they're being given permission to pass when they see farm vehicles pulling to the right side of the road: however, farm vehicles often pull to the right as they prepare to make wide left turns. Be attentive to hand and light signals.

• Use extra caution. When you see farm machinery entering or exiting Missouri highways, and when visibility is low (i.e. during the daylight and dusk hours), take special care. These vehicles are often hard to see, and their speed is often hard to predict.

At Aaron Sachs & Associates, P.C., our personal injury lawyers represent the victims of Missouri trucking accidents. If you've been injured as the result of another driver's negligence, we may be able to assist you. Our firm maintains offices in Springfield, Joplin, Columbia, Cape Girardeau and Kansas City, and we offer a free initial consultation to discuss your case and answer your questions. To schedule an appointment, please call us toll-free at 1-888-777-AUTO, or visit our website.
Attorney meetings by appointment only
Categories