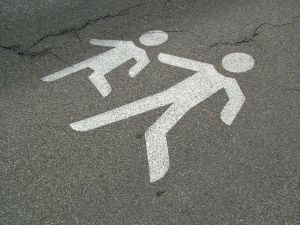 On Monday, a Kansas City boy was killed when his father accidentally backed over him in their family's driveway. According to the Kansas City Star, two year-old Benjamin K. Thompson died at around 8:00 p.m. in the 8400 block of Hillcrest Road.

Police say both parents and other adults were outside when the accident occurred: the father and several others had been building a fence that evening. Benjamin's mother was looking for something in a parked vehicle on the north side of the driveway when the boy walked up and asked her for a toy. She handed him a video game and he crossed the driveway, walking behind his father's truck and heading for a fenced-in section of yard on the other side of the vehicle.

At the same time, the father was preparing to back up to remove a log from the driveway. He checked his mirrors but didn't see Benjamin, who he believed was already on the trampoline in the yard. No one witnessed the collision, but the father realized he had hit something and stopped immediately.

At that point, Benjamin's mother realized that he was trapped under the truck's rear tire and tried to push the vehicle off the boy. She got the father's attention, and he then pulled the truck forward. Police found no evidence that alcohol, drugs, neglect, or any other activity played a role in the crash: they believe it was simply a horrible accident.

"Please, if you got children, please make sure you look out for your kids because they could get by, and you don't even know it," Wanda Thompson, Benjamin's grandmother, told KCTV5.

Indeed, accidents like these are all too common. KidsAndCars.org reports that thousands of American children are seriously injured or killed every year when drivers back up and simply don't see them. Every week, 2 children are killed and 48 are treated in emergency rooms for serious injuries connected to backover accidents. Most often, the victims are between 12 and 23 months old. More than 60% of such accidents involve larger passenger vehicles like trucks, vans, and SUVs - and in more than 70% of child backovers, a parent or other close relative is driving the vehicle.

KidsAndCars.org refers to the area behind a vehicle as a "blind zone," not a blind spot. The organization says, "Referring to the area that lacks visibility behind or in front of a vehicle as a 'spot' grossly understates the magnitude of the danger. On average, most vehicles have a blind zone behind them that measures approximately 7-8 feet wide and 20-30 feet long."

On Thursday, Benjamin's family told KMBC that they had donated Benjamin's organs. His corneas and two of his heart valves went to four children who needed them. The family has established a memorial fund for Benjamin at Community America Credit Union, located at 11501 Blue Ridge Boulevard in Kansas City.

The personal injury lawyers at Aaron Sachs & Associates, P.C. represent injury victims in Kansas City, Missouri and throughout the surrounding areas. To contact our office, call 1-888-777-AUTO, or visit our website.
Attorney meetings by appointment only
Categories