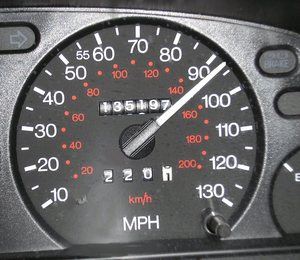 On Friday morning, a 16 year-old driver was killed and three other teens were injured when their vehicle ran off the road and smashed into a tree on Detroit's east side.

"The only thing that makes sense is that the car went sideways into a tree and bounced off," reported Bill Szumanski with WWJ TV. "The windshield is laying about 20 feet in front. The two front doors, one of them is in the street and the other is on the other side of the sidewalk in somebody's front lawn."

The driver, 15 year-old Tyrone Lamb, was pronounced dead at the scene of the crash. Two passengers, both age 15, are hospitalized in critical condition, while a 14 year-old passenger is listed as stable. Local law enforcement officials believe a fourth passenger fled on foot. Lamb's mother told WXYZ News that the teen snuck out during the night, and police say the vehicle was stolen. Authorities continue to investigate the incident, but early reports suggest Lamb may have been traveling near 100 miles per hour when the crash occurred.

Federal data from the National Highway Traffic Safety Administration reveals that approximately 5,000 U.S. teens are killed in car crashes every single year. Closer to home, about 55% of Missouri teens surveyed admit to driving at least ten miles over the speed limit on a regular basis - and of course, many teens who speed don't admit it at all. And while it's been a commonly held perception that young male drivers are more dangerous on the roads, recent studies are discovering that female teens are now just as likely to speed.

It's not just teens who have speeding related accidents, of course. Speeding can mean a driver is traveling faster than the posted limit, but it can also mean that a driver is simply traveling too fast given specific road or weather conditions. Most drivers are aware that the faster a vehicle is going, the longer it will take to stop. However, sadly, many drivers are all too willing to take that risk - and the consequences are often deadly.

Excessive speed has shown up as a contributing factor in nearly one third of all fatal crashes nationwide. Columbia teens should be aware of the ramifications of speeding as it pertains to serious auto accidents.

Let's help Columbia's teens learn good driving habits that will last a lifetime, and make everyone safer on the roads.

At Aaron Sachs & Associates, P.C., our personal injury lawyers serve accident victims in Columbia, Missouri and throughout the surrounding areas, including Jefferson City, Centralia, Ashland, Kirksville, Mexico, Cole Camp, Fulton and Moberly. Our attorneys work on a contingent-fee basis, and we offer a free initial consultation to discuss your case. To schedule an appointment, call us toll-free at 1-888-777-AUTO, or visit our website.
Attorney meetings by appointment only
Categories