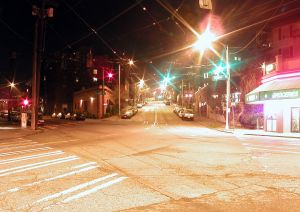 As proud members of the Joplin community, our Missouri car accident attorneys have marveled at the strength and character of our friends and neighbors as we've watched our city rebuild. We're pleased to report another effort in that rebuilding - one that will help keep Joplin drivers safe on local roadways.

Last week, the Missouri Department of Transportation (MoDOT) held a public meeting in Joplin to discuss the rebuilding of the Interstate 44 - Range Line Road interchange. MoDOT has proposed a 2012-2013 project to construct a diverging diamond intersection in that location, just south of where the tornado struck. The new intersection would replace the old I-44 bridges that pass over Range Line Road, converting them to a diverging diamond underneath the highway. The project would begin this year, and wrap up in late 2013.

Diverging diamonds are relatively new interchange designs, geared toward improving traffic flow by doing away with "open" left turns. The first diverging diamond constructed in the United States is located in nearby Springfield, Missouri, at I-44 and Kansas Expressway (Highway 13). While local drivers were initially resistant to the crisscrossing design, MoDOT found that the new style serves two very important functions: (1) it stops traffic from backing up because drivers are waiting on left turn signals, and (2) it's cost-effective. It took less than half a year to convert the intersection, and the cost was about $3 million. Compare that to the construction of more traditionally designed intersections, which typically take 2 or more years to build and cost approximately $10 million.

What's more, diverging diamonds are safer than other kinds of intersections. According to Michael Trentacoste, of the Federal Highway Administration (FHA), "From a safety standpoint, we knew there would be less conflict points. You have traffic that wasn't going to be crossing in front of oncoming traffic, because traffic is moved to the left." The term "conflict points" refers to the places in an intersection where a collision is possible. There are 26 conflict points in a traditional intersection, but only 14 in a diverging diamond.

According to the Diverging Diamond Interchange's (DDI) official website, these intersections offer several benefits in terms of accident prevention, including the following:

• Conflict points are spread out throughout the intersection, decreasing the risk for chain reaction collisions and multiple accidents.

• It is nearly impossible for a driver to enter a highway ramp going the wrong way.

The new diverging diamond in Joplin would give drivers additional protection by doing away with the current cloverleaf design. In the current structure, vehicles that are slowing to exit on Range Line Road are forced to use the same lane as vehicles that are accelerating to merge onto I-44.

The attorneys and staff at the law firm of Aaron Sachs & Associates, P.C. are deeply committed to rebuilding efforts in the Joplin community. To learn more about the relief effort, click here. To view our public service announcement, click here.