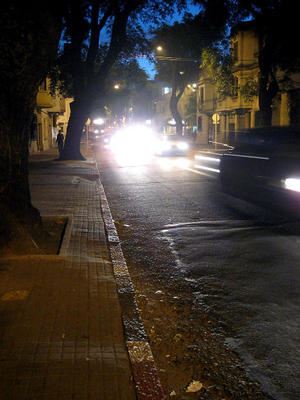 A Texas family has filed suit against two bars after their daughter was paralyzed by a drunk driver with a blood alcohol content more than three times the legal limit. According to KVUE-TV in Austin, the lawsuit was filed against that driver, 25 year-old Lauren Cherry, and two 6th Street bars, Barcelona and Toulouse, where Cherry was reportedly drinking in the hours before the crash.

Authorities say Cherry was driving home from the bars when she ran off the road onto the sidewalk, where a group of five young girls was standing, waiting for another friend to be dropped off for a sleepover. Cherry struck one of the girls, 13 year-old Ekia Smith, knocking her into a metal fence. Cherry then left the scene of the crash, went to her home, and returned an hour later, where she was arrested.

Smith's skull was cracked and she suffered a traumatic compressed brain injury in the accident. She was on life support for 15 days, and doctors told the family it was unlikely the young girl would survive. However, when Smith was taken off life support, she began to breathe on her own. She is now home, but in a permanent vegetative state. She is not expected to regain any measure of cognitive brain function.

The lawsuit was filed by Kim Jenkins and Catherine Henry, Ekia's mother and grandmother. It alleges that Cherry was over-served alcohol at the two Austin bars, and that no one at the two establishments attempted to prevent her from getting behind the wheel. "A, you have got to drink and drive responsibly. It's getting out of control," said attorney Carl Barry, who is representing Jenkins and Henry. "B, there has to be a responsibility to serve responsibly as well. This woman was three to four times over the legal limit at the time of the accident."

The legal term "dram shop" refers to a bar, restaurant or establishment that sells and serves alcoholic beverages. In general, the state of Missouri prohibits what is known as "dram shop liability," meaning businesses can't be held responsible for injuries caused by intoxicated patrons. However, under state law, personal injury and wrongful death lawsuits can be brought "against any person licensed to sell intoxicating liquor by the drink for consumption on the premises when it is proven by clear and convincing evidence that the seller knew or should have known that intoxicating liquor was served to a person under the age of twenty-one years or knowingly served intoxicating liquor to a visibly intoxicated person." (Section 537.053, RSMo).

According to data from the Missouri Highway Patrol, 218 people died and 3,823 were injured in 2010 crashes involving a drunk driver. Alcohol was a contributing factor in 27.3% of all fatal accidents in Missouri during the same year.

The personal injury lawyers at Aaron Sachs & Associates, P.C. serve the victims of Missouri auto accidents. We represent clients in Kansas City, Independence, Lee's Summit, Blue Springs, Liberty, Excelsior Springs, Butler, Belton, Clinton, Warrensburg, Sedalia, Chillicothe, Parkville and Richmond. If you've been injured in a crash caused by another driver's negligence, contact us today to schedule a free initial consultation. You can reach our office 24/7/365 by calling us toll-free at 1-888-777-AUTO, or by visiting our website.
Attorney meetings by appointment only
Categories