The sheer size and tonnage of a semi-truck makes any accident a potentially devastating event. Jefferson City Missouri truck accident lawyers were glad to hear that an Oct. 6 semi crash resulted in no injuries. This is not usually the case. We have seen too many cases of semi-truck accidents leading to catastrophic injury and death, usually for the occupants of any passenger vehicles that were involved. 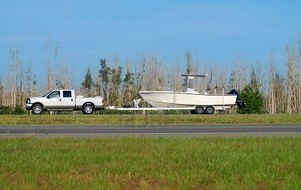 In this particular semi-truck accident, the truck driver ran off the right side of Algoa Road in Jefferson City, right where the street runs parallel to the Union Pacific railroad tracks. The driver then over-corrected (which is always dangerous, but even more so in a semi than a passenger vehicle) and crossed the center line, into oncoming traffic. It illustrates perfectly that no matter how careful one drives, accidents can happen in the blink of an eye, out of nowhere. Imagine seeing an 18 wheeler coming straight at you, and having little or no time to react!

The big rig slammed right into an oncoming pickup truck, driven by Kevin Case, fortunately missing the occupants but hitting the boat and boat trailer that the pickup was towing. The semi then ran off the road again on the left side and went partially over an embankment, managing to stop just short of the Union Pacific tracks.

This accident could have been a lot worse. Fortunately, no one was injured and there were no hazardous materials spilled onto the roadway. What could have been a disaster only resulted in an inconvenience as both Algoa Road and local train traffic had to be stopped while the accident scene was cleared.

No mention was made of why the semi-truck driver, Clifford Williams, went off the side of the road initially, leading to this unfortunate chain of events.

Thankfully, no one was injured in this accident, but many people who are involved in semi-truck accidents do not get off so lightly. The Missouri Department of Transportation provides some statistics on semi and tractor trailer accidents:

Contrast those numbers with those of Missouri car accidents not involving a tractor trailer. Although car accidents are much more numerous, (upwards of 72,000 each year) they have a much lower fatality rate--only 0.6%.

It seems that any accident claim against the semi-truck company's insurance carrier would be cut and dried, since the fault is quite clear. (At least according to the news report we are basing this article on.) However, we know from twenty years of experience dealing with truck companies' insurers that they frequently are not cut and dried at all. Semis carry a lot of insurance, because they can be so dangerous and destructive on our nation's highways--but when the stakes are high, insurers look for ways to save money and pay out as little as possible.

If you are ever involved in a Jefferson City Missouri semi-truck accident, the law firm of Aaron Sachs & Associates, P.C. may be able to help you receive a fair settlement for your injuries. Call us anytime, toll free, to set up an initial consultation with one of our truck accident attorneys.