With a recent train accident in Lincoln County, Friday July 1, the Southeast Missouri Accident Lawyers want to remind everyone of the dangers of railway crossings and offer both safety tips and important facts about trains, rail crossings, and train accidents. 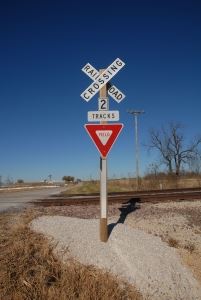 Railway crossings continue to pose one of the most dangerous intersections on Missouri roads today. Quite often a train accident involving a car wreck occurs when a driver ignores the crossings warnings. But not all crossings have visual or audible warning devices. And with "quiet zones" (rail-road intersections with noise restrictions in place) trains pose a significant and very dangerous risk to motorists.

According to the National Highway Transportation Safety Administration (NHTSA) there are approximately 268,000 highway-rail and pedestrian crossings in the United States. A highway-rail crossing is defined by the Federal Railroad Administration (FRA) as "an intersection where a roadway crosses railroad tracks at the same level." NHTSA also reports that most highway-rail traffic fatalities occur about 25 miles from home. And that a train collides with a vehicle or person once every 100 minutes.

From the Bureau of Transportation statistics, in 2009 there were 705 fatalities and over 7,882 injuries from 3,818 accidents nationwide. And the FRA Office of Safety Analysis report shows 22 deaths in Missouri in 2010 with an additional 12 attributed to highway-rail incidents. This year there have been 9 deaths in Missouri so far. Missouri saw 34 total train accidents in 2010 and 22 in 2011.

It is easy to misjudge the speed of a train and underestimate how quickly it will reach a crossing. Because they are so large, they appear to move much slower and to be farther away than they really are. Compare this to watching a plane in the sky. They appear to move very slowly or to not move at all. Yet most planes are traveling at least 120 mph in order to fly.

One single locomotive weighs from 120 to 240 tons. The length of most freight trains is anywhere from 75 to 130 cars long. A freight train can weigh as much as 19,000 tons.
A train traveling at 50 mph can take up to a mile to stop. By the time the engineer has spotted a car or truck on the tracks and pulls the brake it is far too late to avoid the collision.

Southeast Missouri Accident Lawyers remind drivers that the cross buck, the national sign for a railway crossing, is a regulatory sign which means yield. This means a motorist must yield to any and all train traffic. The driver of any motor vehicle is responsible for obeying traffic control devices and adhering to all traffic laws.

If you are involved in a train accident it is important to know the facts and to determine your options. Any of our lawyers are available to answer questions. Contact our office for an appointment.