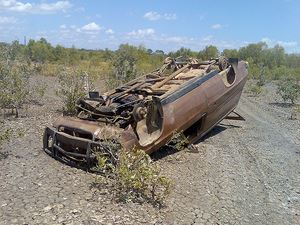 According to the Missouri State Highway Patrol's Online Traffic Crash Report
the driver of the vehicle, Kaylee R. Emmendorfer, 21, veered off to the right shoulder of the road, and then overcorrected. The resulting motion caused the 1995 Mitsubishi 3000 GT to go off the left side of the road, and roll over. Ms. Emmendorfer sustained moderate injuries, but the passenger in the vehicle, Seth A. Adams, 22, was seriously injured in the crash. Both people were taken by ambulance to Perry County Memorial Hospital.

While still at the hospital, Emmendorfer was charged with driving while intoxicated, and second-degree assault in connection to the crash. As all Perryville Auto Accident Attorneys are aware, the severity of the penalty, if Emmendorfer is found guilty, depends on whether or not this is her first offense. As she is only 21, we sincerely hope that it is.

For a 1st DUI conviction, Missouri law imposes a jail term of up to six months, a fine of up to $500, a 30 day full license suspension, and a 60 day restricted license after the 30 day full suspension. There is also a $45 license reinstatement fee to be considered.

For more information on DWI penalties, visit the Missouri Department of Revenue.

The Perryville Personal Injury Firm of Aaron Sachs & Associates, P.C. has handled many cases for victims who were injured or killed in drunk driving accidents, and as a result we do not think these laws are too strict at all.

Here are some tips for young people who have just reached drinking age:

• Appoint one non-drinking friend as the designated driver before the party starts. Frequently there will be someone in your circle of friends who is not a big drinker, and will be delighted to take on this position.

• Stay home!! If a friend gets drunk at your house, call them a cab, invite them to spend the night, or be a real friend by taking away their car keys.

• Do not get into a car with an intoxicated friend--it could be your life on the line.