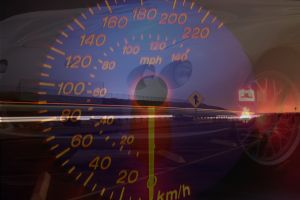 When Missouri drivers exceed posted speed limits, they increase car accident risks for both themselves and for any motorists traveling near them. In this post, our Springfield personal injury lawyers discuss the way speed impacts roadway safety.

Why do drivers speed?

Research from the National Safety Council (NSC) indicates that many drivers cite speed as a specific threat to roadway safety. However, many of those same drivers also admit to exceeding the speed limit on a regular basis. Here are a few reasons why:

A driver's stopping distance can be calculated by combining reaction distance (the time it takes to realize you need to brake and move your foot to the brake pedal) and braking distance (the time it takes your vehicle to slow and stop). The average driver requires about 1.5 seconds to react - and at 60 miles per hour, a vehicle travels approximately 132 feet during that short period of time. The faster you're moving, the less time you have to react and respond to roadway obstacles.

In addition, speeding increases the energy associated with a crash, which is dangerous because most vehicles are built to protect occupants at low speeds. According to the Insurance Institute for Highway Safety (IIHS), "there are limits to the amount of crash energy that can be managed by vehicles, restraint systems and roadway hardware such as barriers and crash cushions. The higher the speed, the higher the likelihood that these limits will be exceeded in crashes, limiting the protection available for vehicle occupants." For instance, if impact speed rises from 40 miles per hour to 60 miles per hour, the crash energy rises by 125%.

What are the consequences of speeding?

The consequences of exceeding the speed limit can be numerous and far reaching, including the following:

• Car accident fatalities. Annually, more than 13,000 people are killed in U.S. car accidents where speed is cited as a contributing factor.

• Construction zone accidents, injuries and fatalities. In 2011, speed was one of the top five factors contributing to car accidents in Missouri construction zones. These accidents killed 11 people and injured an additional 701. Under Missouri law, drivers who speed in work zones are subject to increased fines.

• Hazardous school crossing zones. During school hours, speed limits are reduced in school zones because slower speeds reduce the number and severity of pedestrian and bicycle accidents. Traveling through a school zone at high speeds can prove to be fatal. Missouri drivers who are ticketed for speeding in school zones are also subject to increased fines.

• Numerous costs and expenses. The NSC estimates that "every minute 'gained' by speeding to a destination costs U.S. society over $76,000." Each year, speed-related accidents result in more than $40 billion in costs.