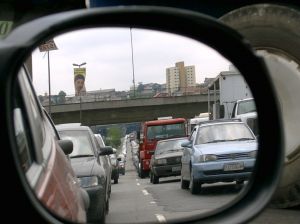 Here in Kansas City, heavy metro traffic can agitate even the most patient driver. However, as our Missouri car accident lawyers know, aggressive drivers can pose a serious threat to all motorists on the road. The National Highway Traffic Safety Administration (NHTSA) defines an aggressive driver as "an individual [who] commits a combination of moving traffic offenses so as to endanger other persons or property." While many people think that aggressive driving is the same thing as "road rage," that's actually not the case. Road rage is a media-invented term that's used to describe violent roadway incidents, like when a driver physically assaults another motorist, or uses his or her vehicle as a weapon. Those actions are criminal offenses. In contrast, aggressive drivers commit traffic offenses - like speeding, tailgating, illegal passing or dangerous lane changes - that endanger other motorists on the road.

How big is the problem of aggressive driving?
In a study conducted by the AAA Foundation for Traffic Safety, 78% of respondents said aggressive driving was a serious or extremely serious safety issue on U.S. roadways. In spite of these concerns, respondents also admitted to engaging in the following behaviors within the past 30 days:

• Nearly half of respondents said they had exceeded the posted speed limit by 15 miles per hour on major highways.

• 58% admitted to speeding up to beat a yellow light.

• 41% said they had honked at other drivers.

• 22% said they had followed another driver too closely.

• Behaviors commonly linked to aggressive driving factor into an estimated 56% of all fatal crashes nationwide.

What factors contribute to the problem of aggressive driving?
Research from the Automobile Association suggests that numerous environmental and psychological factors can influence driver aggression, including:

• Noise & temperature. While these factors don't necessarily provoke aggressive behavior, loud or hot conditions can directly influence the level or intensity of aggression.

• Territoriality. From drivers' perspective, researchers found that motor vehicles appear to straddle the line between public and private domains. It's common for drivers to view the vehicle as their own private space, or an extension of their home, which can affect the way they behave when they drive the vehicle on public roadways.

• Do everything you can to move out of the driver's way. Don't speed up or attempt to challenge the driver in any way.

• Don't make eye-contact with the driver, and refrain from returning any gestures or comments.

• Report aggressive driving to law enforcement officials. (Be sure you pull over in a safe place before using your cell phone.)

Aaron Sachs & Associates, P.C. is a personal injury law firm serving auto accident victims throughout Kansas City and the surrounding areas: we represent clients in Independence, Lee's Summit, Liberty, North Kansas City, Excelsior Springs, Gladstone, Kearney, Pleasant Valley and Smithville. If you've been injured a collision involving an aggressive driver, and you'd like to speak with a lawyer concerning your legal rights, we invite you to contact our office today. Our attorneys work on a contingent-fee basis, and we offer a free initial consultation to discuss your case. You can reach us by calling toll-free 1-855-695-1426, or by visiting our website.
Attorney meetings by appointment only
Categories