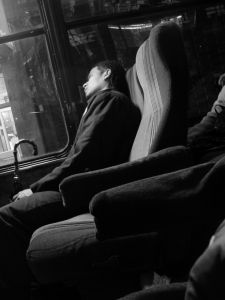 Since we work with auto accident victims, our lawyers know that numerous factors can contribute to collisions resulting in injury. One such factor is fatigue, which can severely impair a driver's ability to assess roadway situations and respond to them appropriately. And when a fatigued driver is behind the wheel of a fully loaded bus, the potential for disaster is even greater.

In recent years, numerous fatal motorcoach accidents have involved drivers who violated federal guidelines that limit the length of bus drivers' shifts. In January, a New York bus driver was sentenced to six years in prison for causing a serious crash that killed four passengers and injured 50 others. During his criminal trial, the driver admitted to falling asleep at the wheel. A federal investigation revealed that he had complained of fatigue in the days leading up to the accident, but his employers reportedly forced him to continue his route. After the crash, the company - Sky Express - was shut down by officials from the Federal Motor Carrier Safety Administration (FMCSA).

How does fatigue impact a bus driver's performance?

• According to the National Highway Traffic Safety Administration (NHTSA), driver fatigue contributes to more than 100,000 auto accidents every year.

• Researchers at the Virginia Tech Transportation Institute (VTTI) estimate that drowsy drivers are four to six times more likely to cause a collision.

What are some common myths about driver fatigue?

• Drinking coffee or other caffeinated beverages helps to prevent drowsy driving. Caffeine can make you feel more alert, but the effect is only temporary. Caffeinated beverages are not a substitute for sleep - in fact, the National Safety Council reports that "people who take stimulants while severely sleep deprived are likely to have 'micro sleeps,' which are essentially four- to five-second naps. A vehicle travelling 55 mph can cover more than 100 yards in four to five seconds - plenty of time for an accident."

• I'm not at risk for drowsy driving because I can tell if I'm about to fall asleep. Drowsiness is an involuntary human response to fatigue: it can't be controlled.

• If I feel sleepy when I'm behind the wheel, I just roll down the window or turn up the radio to help keep myself alert. Scientifically, neither of these methods has any impact on a driver's alertness.

The bus accident lawyers at Aaron Sachs & Associates, P.C. represent injury victims throughout the state of Missouri. If you or a loved one has been injured in a collision involving a large commercial vehicle, you may be entitled to compensation for your losses and damages. Our attorneys work on a contingent-fee basis, and we offer a no-cost, no-pressure consultation to discuss your case. To schedule an appointment, call us toll-free at 1-888-777-AUTO, or visit our website. Offices in Springfield, Joplin, Columbia, Cape Girardeau and Kansas City.
Attorney meetings by appointment only
Categories