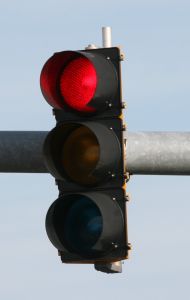 Thirty seconds after police received a report of a possible drunk driver, that very driver caused a seven car pileup that left one woman dead. It happened last Friday in Wisconsin: according to the Eau Claire County Sheriff's department, 35 year-old Travis Hazelton slammed into a line of six stopped vehicles that were waiting at a stop light. One man - 26 year-old Jesse Schreiner, Hazelton's passenger - was pronounced dead at the scene. In addition, five people - including Hazelton - were hospitalized after suffering injuries in the crash.

Authorities say that alcohol was a large contributor to the accident, and Hazelton has since been charged with homicide by drunk driving. He was not immediately arrested because he remains in the hospital; however, he is expected to be taken into custody promptly after he is released. There are no recent reports on his current medical status.

WEAU 13 reports that Hazelton has had a fair amount of legal trouble within the past few years. Three years ago, he served time for making counterfeit money, and in April 2011, he was convicted of his 3rd-drunk driving offense. Now, Hazelton is facing serious legal consequences, as the accident constitutes a 4th offense, and also resulted in a fatality.

According to the National Highway Traffic Safety Administration (NHTSA), driving under the influence is a leading cause of crash fatalities in the United States: an average of one person is killed every half-hour in an auto accident involving alcohol. What's more, NHTSA also predicts that three in every ten Americans will be involved in an accident caused by alcohol within some point of their lives. Despite raised awareness about the dangers of drunk driving, far too many innocent people still die in these totally preventable crashes.

Penalties associated with drunk driving offenses vary from state to state. Here in Missouri, law enforcement officials take accidents involving alcohol very seriously, and courts are often strict about sentencing. A drunk driving accident causing death to any involved party is considered a Class C felony, punishable by up to 7 years in prison and up to $5000 in fines. If a fatal alcohol-related crash results in the death of two or more people (or any person who is not the driver's passenger), or if the driver has a blood alcohol content of 0.18 or above, the driver can be charged with a Class B felony. If convicted, offenders can be sentenced to five to 15 years in prison.