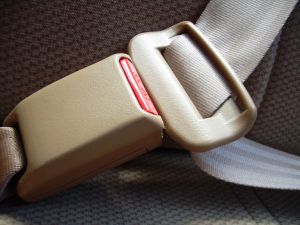 It's no secret that our Columbia car accident attorneys strongly support any and all measures that make Missouri drivers safer. Unfortunately, the most basic measure available - the use of safety restraints - is often neglected by drivers. We've worked with clients whose lives were saved by seat belts, and we've seen cases where failing to buckle up resulted in serious injuries or death. We remind you again to fasten your seat belts and insist that your passengers do the same: it's Missouri law, and it's just good sense. Furthermore, since car accidents are the leading cause of death for children ages 3 to 14, parents need to know which measures are appropriate, given the sizes and ages of their children.

Consider a Missouri accident that happened last week: a rear end collision in Arbyrd resulted in head injuries to a 3 year-old child. The child was wearing a seat belt, but he was not placed in a child safety seat. No one else was injured, but the child was airlifted to a children's hospital.

As we can see, children are especially vulnerable to injury in car collisions - even minor ones - so it's all the more imperative that they receive the best possible protection. Missouri law requires that all children who are under the age of 4 (or who weigh less than 40 pounds) use a car seat with a five-point harness.

Here in Columbia, readers may also remember a terrible accident last year that seriously injured a five year old boy who wasn't properly restrained. Lucas Klaus was a passenger in a vehicle that ran off the road, then traveled approximately 300 feet, fortunately stopping right before it went into a creek. Because Lucas was wearing no safety restraint, he was found outside the vehicle. He was life-flighted to University Hospital in Columbia.

According to the Missouri Highway Patrol, the driver of the vehicle was under the influence of alcohol. 32-year-old Elizabeth Klaus was also taken to University Hospital with minor injuries. She was released on Tuesday and turned herself into the Boone County Jail. She posted a $9,000 bond after being arrested on suspicion of a third DWI and 2nd degree assault.

According to the Missouri Department of Transportation (MoDOT), seven out of ten Missourians killed in car accidents are not wearing seat belts. On the other hand, if you're wearing a properly fastened lap and shoulder belt, you are 45% more likely to survive a serious accident. The numbers are even more staggering where children are concerned: car seats with five-point harnesses reduce the accident fatality rate by 71% for infants (children under a year old) and by 54% for toddlers (children ages 1-4).

Here are the specific terms of Missouri's Child Restraint Law:

*Child safety seats with five-point harnesses are required for all children younger than 4 or smaller than 40 pounds.

*Booster seats or child safety seats are required for all children ages 4-7 weighing at least 40 pounds, unless they are 4'9" tall or weigh more than 80 pounds.

*Seat belts are required for everyone over the age of 8 weighing more than 80 pounds.

We urge all Missouri motorists to put the safety of our children first. Please remember, not only are safety restraints required by law--they do prevent serious injuries and save lives.

If you or a loved one has been injured in a car accident in Columbia, Missouri, or in the surrounding areas, visit our website for more information, or contact us toll-free at 1-888-777-AUTO to schedule a free initial consultation.