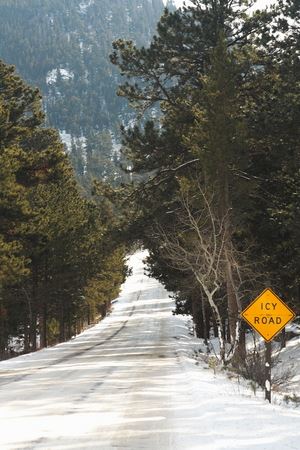 The first signs of winter have finally arrived in the Ozarks. During Tuesday's morning commute, there were multiple accidents reported - including one fatal crash - as a result of Missouri's notorious "black ice," which affected sections of Interstate 44, U.S. 65 and James River Freeway. Black ice is most likely to form on bridges and overpasses: cold air flowing above and below the structures causes them to collect ice and snow more quickly. For this reason, the flyover bridges in the James River Valley were especially treacherous yesterday morning.

According to the Springfield News-Leader, the fatal crash occurred on I-44, west of Halltown, just before 7:30 a.m. Larry Hall, 55, was killed when his vehicle ran off the road, hit a guardrail, overturned and rolled down an embankment. Shortly after, a secondary collision occurred - this one involving a semi-truck and a car - but no one was injured in that accident. Meanwhile, commuters on U.S. 65 experienced serious congestion and delays following a multi-vehicle wreck on the bridge over Springfield Lake. Traffic was redirected onto Evans Road for several hours after that crash.

Black ice is most common during the night time hours and in the early morning, when temperatures tend to be at their coldest. In addition to being dangerous, black ice can be extremely difficult to see, because it forms with almost no air bubbles and is almost completely transparent. All too often, drivers mistake patches of black ice with wet spots on the pavement. Studies have shown that the distance a driver requires to stop is nine times greater on black ice than it is on dry pavement.

What if I hit a patch of black ice?

• Stay calm, and don't make the mistake of slamming on your breaks or jerking your wheel.

• Slow down by easing off the accelerator. If you instinctively hit your breaks when you hit a patch of black ice, you mill most likely skid.

• If possible, shift into a lower gear. This will give you more control over the vehicle.

• Maneuver your vehicle toward areas of pavement where you can find better traction.