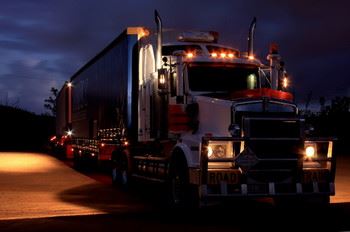 Beginning today, the Missouri Department of Transportation (MoDOT) is conducting a month-long awareness campaign connected to driving safely around commercial vehicles. According to MoDOT's official news release regarding the campaign, crashes involving passenger vehicles and big rigs are actually on the decline. However, when these accidents do occur, research has shown that it's most often passenger vehicle drivers (especially young ones) who "unnecessarily endanger themselves due to inattention and reckless driving around big rigs."

If you've never driven a commercial truck, you may not understand that these vehicles are very different from passenger cars and trucks. Because of their sheer size and weight, they take longer to speed up and longer to slow down. Consequently, it's important to allow big trucks extra space, so you don't put yourself - and your passengers - in jeopardy.

Recently, in New York, a woman died after the car she was riding in was smashed into a concrete divider by a tractor-trailer. Police are still investigating, but they say it appears that the fault lies with the car's driver. The passenger vehicle was a livery cab - a non-medallion car service that was ferrying the 26 year-old woman from the Bronx. Some witness reports suggest that the cab may have been backing up when it was struck, and police speculate that the driver may have missed the correct exit and then attempted to backtrack.

The cab driver was taken by ambulance - he suffered non-life-threatening injuries. The driver of the tractor trailer sustained minor injuries, and he was treated at a nearby hospital and released. However, the 26 year-old woman (who was riding in the backseat) was killed. Her body was trapped inside the vehicle for nearly 5 hours: at this point, it is not known whether she died as a result of injuries sustained in the accident, or in the fire that erupted as a result of the collision.

Sometimes, as drivers, we make snap decisions and execute unsafe maneuvers because we think doing so will save us a few seconds. It's our hope that MoDOT's Big Trucks campaign will cause drivers to think carefully about making those choices when we're sharing the road with big rigs (and other passenger vehicles, for that matter), so that we don't put ourselves and others in harm's way.

How to Share the Road Safely with Big Rigs: 3 Tips from MoDOT

• Don't cut off large trucks or buses. Make sure you can see the top of the truck or bus in your rearview mirror before moving back into your original lane.

• Stay out of a truck's blind spots or "No Zone". Big rigs have large blind spots on either side and up to 200 feet behind a vehicle. Pass only on the left side.

• Watch your following distance. Keep a safety cushion around trucks. Can you see the truck's side mirrors? If not, the driver cannot see you.