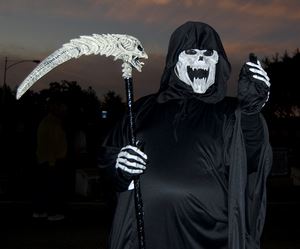 Have you ever noticed how many horror movies feature a big rig, semi-tractor trailers, or their drivers? Quite often truck accidents, from Columbia to Joplin, Missouri, result in real tragedy. But on the big screen there is also the supernatural element to contend with. From truck accidents to road intimidation to murderous rampages, these large vehicles instill fear. And that fear has been capitalized on by the film industry.

But sharing the road with a tractor trailer does not have to be a horror show. By following simple safety tips, such as keeping in mind the size, weight, and lack of maneuverability of a large commercial truck, we can all keep this Halloween season a safer time on our Missouri roads.


Good Safe Tractor Trailer Accident Scares on the Screen
Are you looking for a safe way to be terrorized by a big rig monster this Halloween? Check out the following films for ways to be scared to death by a tractor trailer from the safety of your living room, not while you are behind the wheel of you own car.

We don't promise high quality for all of these films, but sometimes a good Halloween fright comes in the form of a lower budget, poor acting affair. Check these out and have a great Halloween movie fest.


Cars Can Be Scary Too:

More Interactive Halloween Activities
For parties, haunted houses, trick-or-treat alternatives and other fun ideas for Halloween, we suggest you check your community newsletters, city's websites, newspapers, and news sites. Check with your local law enforcement for safe Halloween tips and safe places for the kids or the whole family.

To get you started follow these links to check around these Missouri cities: Columbia,Springfield, Joplin, and Cape Girardeau.