As members of the Joplin community, we were deeply affected by the May tornado, and the destruction and loss of life and suffering it has caused our friends and neighbors. We are grateful that our office was not occupied when the tornado demolished it. And as Joplin workers' compensation lawyers, we have been following with great interest the story of Mark Lindquist, one of the undisputed heroes of the deadly tornado. 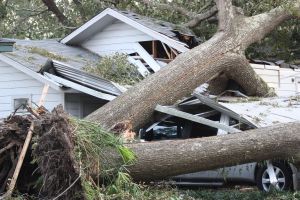 The story of Mark Lindquist almost became a tragedy itself, after his employer's insurance carrier refused workers' compensation benefits to cover the injuries he sustained on-the-job during the tornado. Lindquist was working as a social worker at a group home for developmentally challenged adults when the tornado hit. The job paid barely above minimum wage; not nearly enough for him to afford personal medical insurance.

When the tornado siren sounded, Lindquist and co-worker Ryan Tackett were taking care of three men with Down's syndrome. Although the facility had no basement to retreat to, the two employees had had tornado drills and knew what steps to follow to keep their clients safe. Lindquist and Tackett covered the three men with mattresses for protection, then they climbed atop the mattresses for added weight. Apparently this was necessary because the three clients could not move quickly enough to relocate to a shelter in time.

"I told Ryan, 'If you've ever prayed before, now is the time to do it,'" Lindquist later said.
When the deadly EF-5 tornado actually hit, its 200 mph winds tossed Lindquist nearly a block. His survival was miraculous indeed, but his injuries were severe: every single rib broken, one shoulder obliterated, chunks of flesh ripped out, and most of his teeth knocked out. Lindquist remained in a coma for about two months.

Sadly, the three clients he tried to save were all killed.