A recent press release reminds us about the dangers of cell phone use. 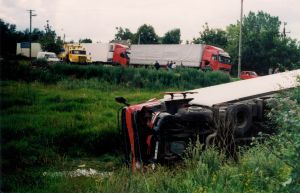 Distracted Driving and Tractor Trailers
The tractor trailer accident referred to happened last year in March near Munfordville, Kentucky. The tractor trailer truck veered from the left lane of southbound Interstate 65, crossed a 60 foot wide median, struck and overrode a cable barrier system, and then entered into the northbound lanes. As he entered the northbound lanes, the tractor trailer struck a 15-passenger van carrying 12 people. The accident killed eleven people, the truck driver and ten of the people in the van. The van was carrying eight adults, two small children and an infant.

According to investigators the driver of the 18-wheel semi-tractor trailer used his cell phone for calls and text messages a total of 69 times in the 24 hour period leading up to the accident.

Distracted driving has been likened to public enemy number 1. Numerous campaigns and safety groups are trying to end this terrible and dangerous practice. But when you combine distracted driving with a vehicle that weighs 40 tons or more and travels 55 to 70 mph, distracted driving creates even more lethal consequences that must be addressed.

"Distracted driving is becoming increasingly prevalent, exacerbating the danger we encounter daily on our roadways," said NTSB Chairman Deborah A.P. Hersman. "It can be especially lethal when the distracted driver is at the wheel of a vehicle that weighs 40 tons and travels at highway speeds."

Also of note was the cable barrier system. The NTSB concluded it contributed to the severity of the accident as it was not designed to redirect or contain a vehicle of that size and allowed the tractor trailer to continue on its path through the median and into oncoming traffic.

Missouri Connection
The investigation into this truck accident showed that the roads were dry and there was no mechanical failure to the vehicle or any medical event experienced by the driver. There were no hazards in the road to initiate evasive driving maneuvers. The investigation cited the driver's fatigue and cell phone distraction as reasons for losing control of his vehicle.

Fatigue and driver distraction are contributing factors to truck accidents in Columbia and throughout Missouri. All drivers need to pay attention to this accident investigation and the resulting NTSB recommendations. It should serve as a reminder to put down the cell phone and pay attention to the road.