A Springfield, Missouri gunman, who police believe fired multiple rounds at a man near West Central and Missouri Streets, is still on the loose. Springfield police continue their search for the man who they believe fired shot at another motorist. He reportedly raced his car through the intersection, left his vehicle and ran towards a tree where he and the victim got into an altercation. 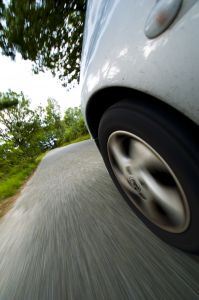 After the accident, the victim of the alleged shots fired tried to speed away in his truck and crashed into a tree at 806 W. Central, according to News-Leader. Officers were called to the Springfield car accident shortly after 12:30 p.m.

While the facts and circumstances of this case are still being investigated, road rage and aggressive driving continue to endanger the safety of all motorists on the road. Our personal injury attorneys understand that drivers get irritated behind the wheel from time to time. It is important to control your emotions as anger and impatience only leads to aggressive driving, which can result in serious injury or criminal charges.

The victim reportedly had cuts on his hand, but it did not appear to be a wound from a bullet. Officials believe that he received the injury in the car wreck. Officers have yet to determine motives in the incident.

Road rage is typically defined as a criminal act while aggressive driving encompasses driving behaviors of which we are all guilty from time -- such as speeding or following too closely.

The NHTSA says you might be an aggressive driver if you:

-Openly express your frustration behind the wheel.

-Neglect to pay full attention when driving. Aggressive drivers commonly eat, drink or talk on the phone behind the wheel.

-Tailgate often. Tailgating is a major cause of accidents that can result in death or serious injury.

-Make frequent lane changes. If you swerve in and out of traffic to advance ahead, you can pose serious threats to other motorist's safety.

-Run red lights. You should not enter an intersection if the light is yellow. Flashing red lights at intersections should be treated as a stop sign.

-Speed. You should not exceed the posted speed limit because you're oftentimes irritated by driving conditions.

The National Highway Traffic Safety Administration (NHTSA) offers you these tips for how to effectively deal with an aggressive driver:

-Remain calm in traffic. Remember to be courteous and patient with other drivers.

-Correct your unsafe driving habits that could possible antagonize, provoke or endanger other motorists.

-Keep stress levels on the road low by allowing plenty of time to get to your destination and even consider changing your schedule or route to avoid congestion. Try listening to calming music or books on tape while driving.

-If your community offers a witness "tip line," be sure to report any incidents of dangerous driving you may witness.

-If an aggressive driver tries to pick a fight or antagonize you, don't make eye contact and don't respond.

The NHTSA discovered that 50 percent of those who participated in a phone survey admitted they had driven recklessly, had sped or engaged in other aggressive driving behaviors.

Aggressive drivers can express their anger in a number of ways. They can give rude gestures, verbal abuse, cut off other cars, deliberately prevent others from moving their vehicles, lay on the horn, flash lights or physically assault another motorist.