The National Highway Traffic Safety Administration (NHTSA) has released its latest information illustrating the dangers of being involved in a bicycle accident in Springfield, Missouri and elsewhere in the United States. 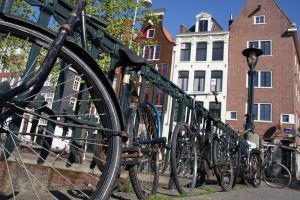 In the U.S., 630 bicyclists were killed in 2009 because of traffic accidents. Another 51,000 suffered injuries from these incidents.

Our Springfield car accident attorneys recognize the dangers of bicycling on our Missouri roads, especially during the spring and summer months when traffic increases significantly. Even though the number of bicycle fatalities decreased from 2008 to 2009 by 12 percent, the roadway is still a very dangerous place for our two-wheeled travelers.

The NHTSA's release reports that 70 percent of the bicycle fatalities that occurred in 2009 happened in urban areas and non-intersections. This number jumped 5 percent from 2008 calculations.

Roughly 75 percent of bicycle fatalities happened during the daytime hours, between 4:00 a.m. and 8:00 p.m. This is also an increase from the previous year -- 6 percent.

The Missouri Bicycle and Pedestrian Federation urges bicyclists to enroll in Bike Education Classes to help decrease your risks of a serious accident.

Ken Kifer's Bike Page would like to tell you about these common mistakes that bicyclists make. Making tiny adjustments can help you increase your safety on our roadways:

-Be sure to stop for stop signs and follow all of the other road rules that motorists do. As a biker, you are to abide by the same laws as a motor-vehicle driver. This goes for red lights as well. By Missouri state and local law, bicyclists are allowed to use the road and by law they have the same rights and duties as other drivers.

-Be sure you're riding in the correct lane. Always ride with traffic, never against it. Avoid riding on sidewalks. Sometimes sidewalks can be more dangerous than the roadway because of pedestrian congestion.

-Make sure your headlight and taillight is working. These lights help you to be more visible to motorists during the evening hours. Also, remember to wear light colored clothing. Every little bit helps. Do as much as you can to be seen by motorists.

For your enjoyment, a complete list of Missouri bicycle trails and trail maps can be found on the Missouri Bicycle and Pedestrian Federation website.