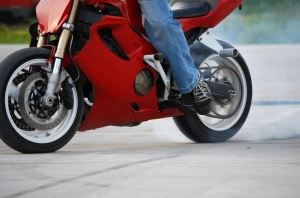 Driving around town the other day, we noticed a bumper sticker that said, "Save A Life--Look Twice. Motorcycles are Everywhere." This served as a good reminder for us. Joplin Motorcycle Accident lawyers want to remind all Missouri motorists that motorcycles are nowhere near as visible to drivers in cars and trucks as other larger vehicles are. That quick glance in the side view mirror while making a left or right hand turn might not be enough to avoid a motorcycle accident.

The following news article about a motorcycle crash on August 9th that killed the rider is a sad illustration of this fact.

According to an article in the Lusk Herald, an Iowa motorcyclist died in a crash fifty miles outside of Lusk, Wyoming. The rider, Jefferson Adams of Pleasant Hill Iowa, died an hour and a half after the fatal collision. He collided with a pickup truck pulling a 28 foot camper, which was driven by Damon Hand of Colorado Springs, Colorado. The Highway Patrol's report indicated that both vehicles were heading north on US highway 85, when Hand began making a left hand turn. Adams moved to pass on the left at the same time as Hand was turning. Somehow his bike struck the camper and he was flung off his motorcycle and fatally injured.

The driver of the pickup kept turning, and Adams got tangled beneath the trailer along with his bike, and dragged under the trailer until Hand stopped just past the turn. Adams was not wearing a motorcycle helmet, which was legal in that state, as it is in many states in the country.

Joplin motorcycle accident attorneys wonder exactly what happened in this tragic accident. Did the driver of the pickup simply not see the motorcyclist as he was turning, and not know what had happened until he felt an impact? Without knowing more of the details, we do not know if there was negligence involved, or if Adam's family might have cause for a wrongful death suit.

Along with reminding all motor vehicle drivers to please look twice and be aware of motorcycles when turning, Joplin motorcycle accident attorneys also want to remind everyone that it has been repeatedly proven that helmets save lives. There is no way to know if Adams would have survived if he was wearing a helmet--but statistically speaking, his chances would have been much greater.

We know motorcyclists like the feeling of riding bareheaded. However, as more states repeal helmet laws, naturally fewer cyclists are choosing to wear a helmet. In fact, motorcycle helmet use has dropped nationwide from 71 percent in 2000 to only 63 percent in 2008. That has brought a corresponding increase in motorcycle injuries and fatalities.

According to the National Highway Traffic Safety Administration, (NHTSA) there were 5,290 motorcyclist fatalities in 2008, along with 96,000 injuries. This was the eleventh increase in deaths and injuries in a row!