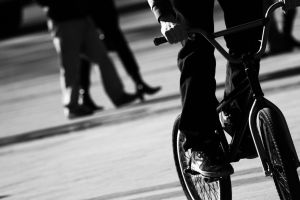 Recent research suggests that more and more Americans are using bicycles as their regular method of transportation, citing factors like economic benefits, health advantages and the impact on the environment. Spring is here, and our personal injury lawyers want to encourage all motorists to share the road safely with bicyclists. We also recommend that cyclists take certain precautions to avoid auto accidents.

Scenario 1: A driver pulls out of a side street or driveway on the right and either (1) strikes an oncoming cyclist or (2) pulls out in front of the cyclist, forcing the bicycle to strike the vehicle.
Avoiding this accident: It can be difficult for drivers to see bicycles coming straight towards them, so this kind of collision is fairly common. Be sure to ride with traffic rather than against it - after all, drivers won't be looking for traffic coming from the wrong direction. Also, using a headlight - even during the day - can help make cyclists more visible. If you're afraid a driver doesn't see you, consider waving your arm from side to side as you approach the vehicle - the side-to-side motion is easier for drivers to detect. And if all else fails, slow down enough so that you can stop if needed. It might be an annoyance, but it's far better to be annoyed than to be involved in an auto accident.

Scenario 2: A bicyclist moves slightly to the left to avoid a roadway obstruction and is rear-ended by a motor vehicle approaching from the behind.
Avoiding this accident: Don't shift into the traffic lane without checking for vehicles approaching behind you. Many cyclists use mirrors (attached to their handlebars, helmets or glasses) so they don't have to physically turn to check. Always signal before you move left, even if the movement is slight - some drivers don't allow extra space for cyclists, so shifting even an inch or two can put you at risk of being rear-ended.

Scenario 3: The driver of a parked vehicle opens his or her door right in front of an oncoming bicyclist.
Avoiding this accident: Unfortunately, this kind of collision happens frequently in metropolitan areas, where bike lanes tend to be placed as far to the right as possible. Cyclists use the term "door zone" to refer to the three to five-foot space in which a bicycle is in danger of being struck by a vehicle's door. To protect yourself, ride far enough to the left so that you won't be struck by a suddenly-opened door. It may mean that you have to ride in the traffic lane briefly, but you're less likely to be involved in an accident. Again, be mindful of other vehicles as you shift to the left.