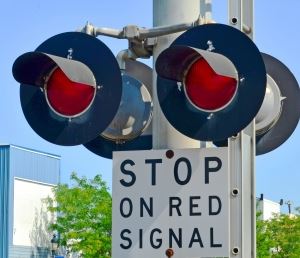 Recently, a Kansas man narrowly escaped life-threatening injury when a police officer dragged him from a cement truck that had overturned on the train tracks. KWCH 12 Eyewitness News reports that the truck driver, Isaac Sullivan, was attempting to make a right turn when his fully-loaded cement truck rolled over onto the tracks. Knowing a train was approaching, a sheriff's deputy responded to the truck accident and worked to extricate the driver from the truck with less than 2 minutes prior to impact. The deputy, John Scaglione, was able to pull the driver free through the windshield. Both men made it to safety mere seconds before the train struck the truck.

In the end, Sullivan suffered a hairline fracture to his collarbone and a torn rotator cuff. But it could have been so much worse. After the incident, he reportedly told Deputy Scaglione that he was having a bad day. The deputy's response? "I said no you're not, you're having a great day. You flipped a cement mixer, you lived through that, the cement mixer got hit by a train and you lived through that. To me, that's a great day," Deputy Scaglione said.

• Drivers are 20 times more likely to die in collisions involving trains than in accidents involving other passenger vehicles.

• Trains often appear to be moving more slowly than they actually are. Remember that freight trains travel as fast as 60 miles per hour, while passenger trains can move even faster - up to 80 miles per hour. Always assume a train is closer to you and moving faster than it appears to be.

• According to the National Safety Commission, "[a] single locomotive weighing 432,000 pounds traveling at 35 mph will impart a collision force on a car of 885,000 tons of force. In order for an average car to impart that kind of crash force it would have to be traveling more than 4,200 mph."

• An average train going 55 miles per hour can require more than a mile to stop. By the time an engineer sees a vehicle on the tracks, it's extremely unlikely that he or she will be able to stop the train in time to avoid a collision.

• In Missouri, all public railroad crossings are equipped with a tag bearing the name of the railroad company, an identification number, and a toll-free phone number. If an accident happens on the tracks, call the number as soon as possible: if a train is coming, every extra second matters.

The personal injury lawyers at Aaron Sachs & Associates, P.C. represent auto accident victims throughout the state of Missouri. We serve clients in Joplin, Carthage, Webb City, Sarcoxie, Carl Junction, Lamar, Pierce City, Noel, Anderson, Pineville and Goodman. Please contact our office to schedule a free initial consultation with one of our attorneys: there is no cost for the appointment, no pressure and no obligation. You can reach us by calling 1-888-777-AUTO, or by visiting our website.
Attorney meetings by appointment only
Categories